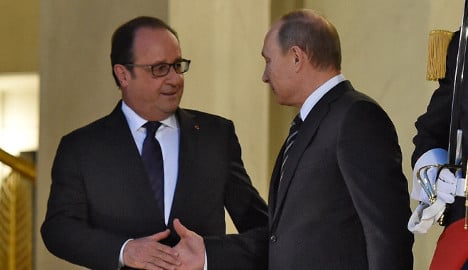 Hollande and Putin in October. Photo: AFP
The French president will meet with Italian Prime Minister Matteo Renzi in Paris in the morning, before heading to Moscow where he will hold talks with the Russian strongman.
Hollande has been on a whirlwind tour seeking to build a coalition to crush IS in Iraq and Syria but has seen few concrete pledges so far, and his campaign has been further complicated by a diplomatic spat between Russia and Turkey.
France invoked a clause requiring EU member states to provide military assistance after the November 13 attacks in Paris, when 130 people lost their lives in a wave of killings by suicide bombers and gunmen claimed by IS.
On Wednesday, German Chancellor Angela Merkel pledged to stand beside France in its fight against the jihadist group after talks with Hollande, vowing to act “swiftly” to see how Germany can help in the fight against terrorism.
The French and German leaders each laid a pink rose among the tributes of flowers and candles in Place de la Republique, the Paris square that has become a rallying point since the bloodshed.
Hours earlier, Defence Minister Ursula von der Leyen said Germany would send 650 soldiers to Mali to provide some relief to French forces fighting jihadists there.
Meanwhile in Britain, Prime Minister David Cameron will on Thursday set out the case for his country to extend its air strikes against IS from Iraq into Syria ahead of a vote by MPs next week.
The British premier has called IS a “direct threat to our security at home and abroad” and on Monday offered to let France use the RAF Akrotiri air base in Cyprus when flying missions against the jihadists.
Cameron met with Hollande earlier this week and has said he “firmly supported” France's actions, but US President Barack Obama has given the idea of greater cooperation with Russia against IS a much cooler reception.
Hollande courts Russia
Hollande's diplomatic efforts also suffered a blow after Turkey shot down a Russian jet, sparking a diplomatic incident between the rival powers fighting in Syria that has threatened to escalate into a wider conflict.
Turkey's military said Wednesday it did not know the warplane it shot down was Russian and it was ready for “all kinds of cooperation” with Russia, after Moscow called the incident a “planned provocation”.
The sole surviving pilot said he had received no warning and the aircraft did not violate Turkish air space, prompting the Turkish army to release audio recordings it said showed the Russian jet was repeatedly warned to change course.
Moscow has intensified its strikes in Syria after IS claimed it brought down a Russian passenger plane over Egypt last month, killing all 224 people on board.
Russia carried out heavy raids in Syria's northern Latakia province on Wednesday, the Syrian Observatory for Human Rights monitoring group said, in the same area where Turkey downed the Russian fighter.
Ankara and Moscow are on opposing sides in the four-year Syrian conflict, with Turkey wanting to see the ouster of President Bashar al-Assad while Russia is one of his last remaining allies.
Russian Foreign Minister Sergei Lavrov has backed the French president's proposal to close off the Syria-Turkey border, considered the main crossing point for foreign fighters seeking to join IS.
“I think this is a good proposal and tomorrow President Hollande will talk to us in greater detail about it. We would be ready to seriously consider the necessary measures for this,” Lavrov said in Moscow.
French jets on Monday launched their first air strikes from the Charles de Gaulle aircraft carrier in the eastern Mediterranean.
Prime Minister Manuel Valls told the French parliament, which overwhelmingly supported pressing the air campaign against IS, that “there is no alternative, we must annihilate Daesh”, speaking to the chamber on Wednesday.
He said French planes, which started hitting Isis targets in Iraq in September 2014, had carried out more than 300 strikes against the jihadists.