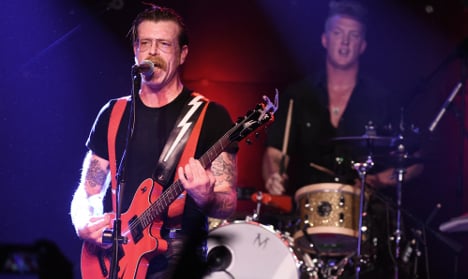 Eagles of Death Metal front man Jesse Hughes. Photo: AFP
“I don't want to spend my life trying to appease assholes I want to spend my life smiling with my friends and entertaining them,” Jesse Hughes, the band's vocalist, told Vice in an interview.
“I cannot wait to come back to Paris. I cannot wait to play. I want to come back. I want to be the first band to play in the Bataclan when it opens back up,” he said.
“I was there when it went silent for a minute. Our friends went there and died. I'm gonna go back there and live.”
Gunmen attacked nearly simultaneously targets across Paris on November 13, killing 130 people, 89 of them at the Bataclan.
The band sat down for a full interview with Vice.com in Los Angeles after returning to America following the carnage.
They each detailed the instant decisions they took to save their lives, and the horrors they saw as the gunmen emptied round after round indiscriminately into the crowd.
The band had been due to perform across Europe until December 10, but has put on hold all further concerts. A number of French fans have appealed on them online to return to play.
“We don't really have a chance. We have to finish the tour,” said Josh Homme, Death Metal co-founder who was not in Paris.
“We have a song called 'I Love You All The Time.' If you're a country artist, if you're death metal, if you're a DJ, it doesn't matter, cover that song and we'll donate the publishing (royalties),” he told Vice.
Url copied to clipboard!