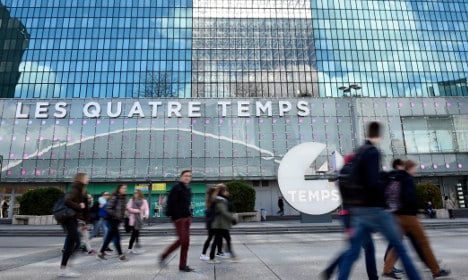 In the end Abdelhamid Abaaoud was “neutralized” in a police raid before he could take any more lives.

Abaaoud is judged by authorities to have been the commander and chief plotter of the Paris attacks as well as one of the gunmen who killed dozens on terraces at bars and restaurants.

His finger prints were found on one of the Kalashnikovs left behind in the car dumped in eastern Paris.

And on Tuesday French prosecutor François Molins confirmed rumours that had been swirling around since the Belgian-Moroccan jihadist was killed in the November 18th Saint Denis raid – rumours that he had planned to target the La Defense business district.

The attack on the area, which is home to the headquarters of many of the biggest companies in France, was to be carried out on either November 17th or 18th, while France was still reeling from the attacks on the 13th.

According to reports in the French media, Abaaoud had asked his cousin to buy two suits that he and an unnamed fellow bomber would wear to blend in with the 180,000 financiers and bankers who descend on La Defense each day.

Two suit covers were found in the Saint-Denis apartment where he was killed.

La Defense is Europe's biggest business district and home to around 3,000 companies.

It is believed that Abaaoud, who intelligence services had presumed was in Syria, had two specific targets in mind.

First was the huge Quatre-Temps shopping centre, which is visited by 45 million shoppers each year and stands in the heart of the district.

The second was the district's police station.

At both locations it is believed the terrorists planned to blow themselves up with the same kind of suicide bomb vests used by those who attacked the Stade de France and the Bataclan concert hall on November 13th.

During the police raid in Saint-Denis a man believed to be Abaaoud’s accomplice blew himself up using a vest.

Another disturbing detail of Friday’s attacks revealed on Tuesday by prosecutors was that Abaaoud and his accomplice, who police are yet to identify, revisited the scene of their crimes on the night of Friday 13th.

Mobile phone data shows that Abaaoud visited the 12th, 11th and 10th arrondissements after he is presumed to have dumped the car used in the terrace shootings in the eastern suburb of Montreuil.

Prosecutors believe that Abaaoud visited the scene of the Bataclan siege while the police raid to free hostages was still ongoing.

He is then believed to made his way to Abervilliers to meet his cousin Hasna Aitboulahcen, before the pair headed to the squat in Saint-Denis later raided by police.

Aitboulahcen was also killed in Wednesday's raid at Saint-Denis.

Prosecutors are still hunting for Salah Abdeslam, who is now believed to have ditched his suicide vest in a bin to the south of Paris.

Investigators suspect Abdeslam was due to carry out an attack in the 18th arrondissement before changing his mind and going on the run, from both police and Isis.

He is believed to be holed up in Belgium.