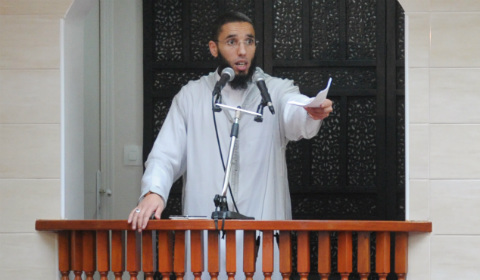 With France in shock after the November 13th terror attacks in Paris, politicians on both the left and right are calling for Imams in the country’s mosques to preach their sermons in French only.

With some mosques considered to be breeding grounds for extremism, those politicians in favour of the move want the centres of worship brought under closer control.

Among the supporters of such a change is the Socialist politician Julien Dray, a former spokesperson for French President François Hollande and co-founder of the group SOS Racism.

“You have to be careful with the sermons of imams,” Dray, a councillor in the Île-de-France region since 1998, told French radio network RTL. “The fact that prayers are in Arabic is understandable, but it’s important the sermons are in French,” he said.

“In the Jewish religion, the sermons are in French and the prayers are in Hebrew. The sermon – that’s where the message is delivered. It has to be in French,” he added.

It's a viewpoint shared by Jean-Michel Baylet, president of France’s Radical Party of the Left who has said he is in favour of “all religions in France being carried out in French by ministers who are well-established in the country”.

But the right hasn’t been silent on the issue either. Former UMP Prime Minister Alain Juppé said recently lawmakers should look at whether constitutional means could be used to oblige imams in French mosques to preach in French.

“Sermons on France shouldn’t be in Arabic,” said the politician with the party now rebranded as the Republicans.

And Marine Le Pen, president of France’s far-right National Front has also weighed in on the issue.

“It’s not difficult to require sermons in France to be given in French. That would also make it much easier to report what subjects are being dealt with,” Le Pen told France’s Europe 1 radio station in late 2014.

But due to France's strict 1905 laws around the separation of religion and the state it is considered highly unlikely the government could interfere to force sermons to be read in certain languages.

Some Muslim leaders have dismissed the calls as a provocation.

“These are the type of politicians who like to pour oil on the fire and watch it burn,” Mohammed Mraizika, the secretary general of the Union of France's Mosques told The Local.

“To ask the imams to read the sermon in French is counterproductive. It wouldn't help solve the problem,” he said.

“What matters is the subject of the sermon. It needs to clear, and strong, and condemn extremism and terrorism,” Mraizika added.

“We want to hear serious propositions, not this kind of thing,” he added.

Others have greeted the calls with a dose of scepticism, with one commentator suggesting it might be a veiled attack on the use of Latin in some Catholic congregations.

There were 2,449 mosques in France in 2012, according to Interior Ministry figures, while the country's Muslim population is estimated to number between five and six million people.

On Tuesday France's leading Muslim body called for imams to require a permit to preach in a bid to root out extremists, and for a new religious body to fight back against jihadist propaganda.

Anouar Kbibech, president of the French Council for the Muslim Religion (CFCM), said the country's imams should be given a certificate – “like a driving licence” – that ensured they promoted a “tolerant and open Islam”.
The CFCM said it would hand out the permits by testing theological knowledge and adherence to French principles, and make them sign an “imams' charter” in which they agreed to “respect the laws of the Republic”.