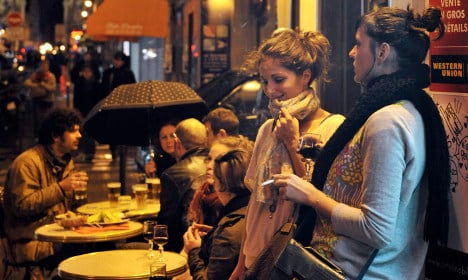 Not all of France is a terrace. Photo: AFP

In the aftermath of the Paris attacks The Local is picking out some of the opinions shared in the French press including this article which aims to remind “our foreign friends” that not all the French live their lives on the terraces.

“Standing side by side to support each other does not mean forgetting about the class inequalities in France, argues Bérengère Parmentier a university lecturer in literature.

There’s something we need to tell our foreign friends. France’s territory is not completely covered by bar terraces where elegant, overqualified girls and boys, working in music or teaching at university, drink while gently kissing.

This image of France has flooded the Internet for several days, coming from our friends around the world or even from the French themselves (#Jesuisenterrasse etc).

Of course, we like this France with its joyful terraces, and I, who am “from the 11th arrondissement” like it more than anyone, and I weep over it.

The north east part of Paris is certainly a very beautiful part of France, but it is only a small – very small – part. And all the “elevenths” (people used to call them “bobos”, or hipsters) who have ventured out into the countryside, the provinces, the suburbs of France, and even the other arrondissements in Paris, know that what they embody is not always liked in France, nor by all French people. You feel so good in the sun, a drink in hand… you can do so many things. You can think, for example, of Matthieu Giroud.

I never knew Matthieu Giroud, and now he is dead. He went to see the concert at the Bataclan. He loved music and certainly loved terraces.

He was also a sociological geographer, a specialist in what we generally call ‘gentrification’ and which he preferred to call ‘embourgeoisement’: the difficult cohabitation of a certain intellectual bourgeois youth and the working class in the same urban zones.

He won’t have had time to reach the age where he could put forward answers. But if I have understood correctly, he started from a very simple principle, not a new one but useful all the same, and which I can try to sum up in one phrase: the beauty of the bar and cafe terraces covers up (badly) the class conflicts.

To live together peacefully, Matthieu Giroud suggested, it is not enough to have different groups next to each other, in the same district, the same building, the same street. You also need to face up to social complexity and the difficulties. Like this for example: All of France is not a terrace.

There are some bastards who want to kill us and the ones we love. In the France that we want to build against them, let’s not forget that it must also include those who are not on the terraces.

This opinion piece originally appeared in Liberation newspaper in French and can be viewed by clicking here.