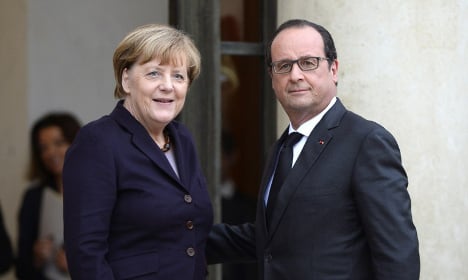 Hollande is expected to look to Merkel to try to ease tensions between Russia and Turkey – two potential components of the anti-Isis alliance – which fell out over the downing of a Russian warplane at the Turkish-Syrian border.

Hollande is on a whirlwind diplomatic tour spurred by the November 13th attacks on Paris that left 130 dead and 350 injured. He is conferring with the major powers in his bid for a coalition that will crush Isis in its fiefdom Iraq and Syria. But the results so far have been sketchy.

US President Barack Obama on Tuesday offered words of condolence to Hollande at the White House but said little in the way of firm commitments. Obama agreed to intensify air strikes on the jihadists that US jets have already been carrying out for months and said he would increase intelligence-sharing.

But he was notably cool on suggestions that the old Cold War foes could work together more closely.

The US president said the problem Washington faced was “Russia's focus on propping up Assad rather than focusing on ISIL”, using another name for the group.

Both Hollande and Obama reiterated their determination to see Assad step down in order to end a five-year war in which 250,000 people have been killed.

The French president said Assad “has been the problem – he cannot be the solution.”

Hollande will take his pleas for closer cooperation to Russian President Vladimir Putin in Moscow on Thursday. France's plea for “coordination” in the fight against the jihadists should find a more receptive ear in Merkel, leader of Paris' closest ally in the European Union.

The fight against terrorism and the huge influx of migrants to Europe are on the menu, and Germany set out its intentions by announcing Wednesday it would send 650 soldiers to Mali to provide some relief to French forces fighting jihadists there.

The rising threat in the west African state was underlined last week when gunmen killed 20 people at an upmarket hotel in the capital, Bamako.

Hollande will also hope that he and Merkel – one of the few Western leaders who talks to Putin regularly – can prevent Turkey's shooting down of a Russian jet on the Syrian border from creating further tensions.

Russia accused Turkey of a “planned provocation” over Tuesday's downing of the jet, but pledged it would not go to war over the issue. NATO member Turkey also sought to defuse the situation, even as one of the Russian pilots insisted that the Turks gave no prior warning before launching their missile.

Meanwhile, Russian Foreign Minister Sergei Lavrov threw his weight behind Hollande's proposal to close off the Syria-Turkey border to prevent the flow of jihadist fighters crossing the frontier. The Turkish border is considered the main crossing point for foreign fighters seeking to join Isis.

“I think this is a good proposal and tomorrow President Hollande will talk to us in greater detail about it. We would be ready to seriously consider the necessary measures for this,” Lavrov told journalists in Moscow.