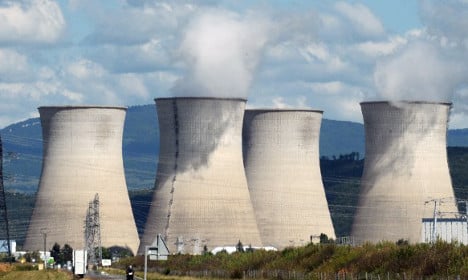 “We are working with police and the gendarmerie to carry out systematic checks of everyone entering nuclear power stations,” Jean-Bernard Levy, president of French state power company EDF has told France 2 television.

“Clearly if there are obstacles to someone entering, they won’t be coming in,” said the head of the company which operates France’s 58 reactors.

Levy noted the sensitive facilities – hugely important in a county where around 75 percent of power is generated by nuclear reactors – had already been at maximum alert before the November 13th attacks.

But he also admitted the EDF group did not have access to France’s so-called “fiche S” (“S file”) which is updated daily to include individuals suspected of links to a terrorist movement or group. Some 10,000 names are on the list, French Prime Minister Manuel Valls said recently.

The EDF president did stress, though, that the group carried out some 100,000 checks a year on people brought in to work on France’s nuclear installations.

The current head of security at EDF is retired general Jean-Michel Chereau, while the group frequently shares information with security services.

However a recent attack in Belgium continues to trouble French authorities.

At the start of August, an individual gained access to a building next to a nuclear reactor in Doel and poured 65,000 litres of oil into a steam turbine, an act officials described as sabotage.

The saboteur was never found and no link to terrorism was established.

French lawmakers in July adopted a new law that will see the country's energy consumption halved by 2050 as the country looks to slash its reliance on nuclear energy.