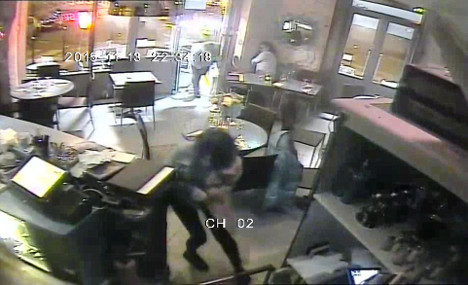 An image from the footage of the attack on the Casa Nostra, bought by the Daily Mail for €50,000. Photo: AFP

Up until Monday night the owner of the Casa Nostra restaurant targeted by the terrorists on November 13th would have been inundated with sympathy, like all those directly affected by the atrocity.

But he has suddenly become something of a hate figure after a French TV show revealed he had sold CCTV footage of the attack to the Daily Mail for €50,000.

That was apparently after he had offered it to a French TV channel, which refused to pay the “crazy” sum.

On Tuesday he was public enemy number one as a social media campaign urged people to leave comments and bad reviews on the restaurant's Facebook page and on Google.

“You should at least have respect for all the victims by apologizing and then giving this dirty money to their parents,” said one commenter, summing up the anger.

“Shameful to decrypt the video and then sell it. Boycott the restaurant Casa Nostra,” said another.

The deal, which took over 24-hours to complete due to the difficulty the Daily Mail had in getting the cash together, was apparently carried out without police permission.

According to the French freelance journalist Djaffer Ait Aoudia, who filmed the negotiations and the handover of cash on a hidden camera, police had viewed the footage and then ordered a technician to encrypt it. “This now falls under the confidentiality of the investigations and it must remain here,” the police supposedly told the restaurant owner.

But in the end he simply organised for a hacker friend of his to decrypt the footage so it could be sold on, Aoudia claimed.

The journalist's undercover footage was shown on the Canal Plus programme Le Petit Journal.

At one point it shows the restaurant owner carefully counting out the Mail’s €50,000 in €50 notes. The Mail then apparently ordered him to destroy the original footage to ensure they had an exclusive.

The British tabloid then published the story of the shocking footage, which shows a gunman point his rifle at two women, pull the trigger, but move off after apparently running out ammunition.

The images were embedded by most news sites around the world, including The Local, but have since been taken down.

On Tuesday The Mail defended their purchase of the CCTV images.

In a statement, the Daily Mail said: “There is nothing controversial about the Mail’s acquisition of this video, a copy of which the police already had in their possession. It was obtained against stiff competition from French and international media outlets and provided a vital perspective on a massive global news story.

“The publication of the video – one of many that emerged in the aftermath of the events in Paris – on MailOnline and stills in the paper was demonstrably in the public interest.”

The Casa Nostra clips were not the only controversial incident involving video footage of the terrorist attacks.

During the raid at Saint Denis last Wednesday journalists could be seen trying to buy clips taken on bystander’s mobile phones.

A journalist who said she was from the BBC was filmed by a hidden camera handing over hundreds of euros for several clips of the shoot-out between police and terrorists on mobile phones.

And on the Sunday November 15th, just two days after the attacks, the French Channel M6 caused anger when it broadcast footage of the immediate aftermath of the attack on the Belle Equipe bar.

A TV crew had been embedded with French firefighters and by chance was the first to arrive on the scene, which showed the devastation the terrorists left behind with bodies strewn across the blood covered terrace.

Despite the Ministry of Interior asking M6 not to broadcast the footage “for the sake of dignity”, the channel ignored the request to the disgust of many viewers.

Just as in the case of the Daily Mail, the word “Exclusive” was plastered over the footage.

Then there were the members of the public, who stumbled upon the scenes of the terror attacks and whose first thought was to pull out their mobile phones to take video footage.

Otto, who is part of the Algerian family that runs the Le Carillon bar, also targeted in the November 13th attacks, told The Local that when he arrived at the scene minutes later, the police were shouting at bystanders to stop filming people on their phones.

The amount of trouble news sites and TV stations desperate for footage can run into was seen in the attack on the offices of French satirical magazine Charlie Hebdo in January.

After leaving the building housing the publication, one of the Kouachi brothers, who carried out the attacks, was filmed walking up to a policeman and shooting him in the head at close range.

One young man took footage of the event and immediately uploaded it to Facebook and it was broadcast by many TV stations in France, who were later condemned by TV watchdogs and the public alike.

The man who filmed the footage later took it down, saying he regretted uploading it and blamed it on a “stupid reflex” by someone who is used to putting everything on social media for the world to see and share.

“I take photos of cats and I put them on Facebook. This was the same stupid reflex,” he added.

But the reality is that many of the videos that emerged in the aftermath of the attacks have been viewed millions of times around the world, not least the moment when the gunman stormed the Bataclan.