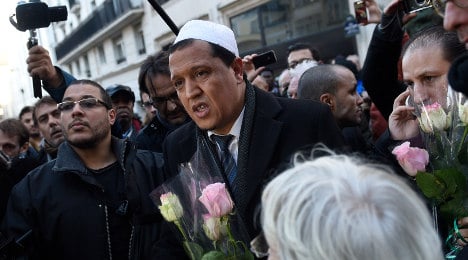 Hassen Chalghoumi, the Imam of Drancy pays his respects after the Charlie Hebdo massacre.
Anouar Kbibech, president of the French Council for the Muslim Religion (CFCM), said the country's imams should be given a certificate – “like a driving licence” – that ensured they promoted a “tolerant and open Islam”.
The CFCM said it would hand out the permits by testing theological knowledge and adherence to French principles, and make them sign an “imams' charter” in which they agreed to “respect the laws of the Republic”.
Kbibech did not say whether he thought the process should be obligatory for all imams.
“The time for action has come. The Muslims of France will play their part,” said Kbibech. Anouar Kbibech, president of the French Council for the Muslim Religion (CFCM). Photo: AFP )
He also said the CFCM would set up a “religious council” that would challenge jihadist ideology using theological arguments.
Coming 11 days after the attacks that killed 130 people in Paris, Kbibech said those who engaged in violence would “never have the support of France's Muslims”.
His thoughts echoes those of Mohammed Mraizika, secretary general of the Union of French Mosques.

“The state must fight Daesh and the Imams in mosques must work hard to show what happened has nothing to do with Islam. Everyone has to take responsibility,” Mraizika told The Local.

There have been renewed calls, including from the French Prime Minister to expel radical preachers and close down mosques that have been taken over by extremists.

Mraizika and his organisation have thrown his support behind those measures.

“We are in 100 percent agreement. Preachers of hate should be expelled and mosques closed, France has the powers to do this,” he said.

“Muslims don't have the legal means, but we have the ideological means and we must fight them.”