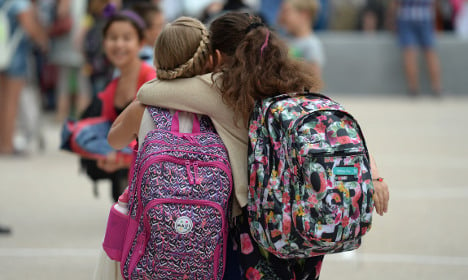 Schoolgirls in Strasbourg. Photo: AFP
The OECD think tank found that French pupils' study time at school pales in comparison to the annual hours put in by those in other developed countries.
“France, with its 4.5-day weeks — compared to 5-day weeks in most other countries – remains the country with the fewest school days of the year,” noted OECD anaylst Eric Charbonnier.
In primary school, pupils are at school for 162 days a year, compared to an average of 185 days across the OECD countries.
The fact that France was at the bottom is all the more striking considering that recent reforms actually raised the total numbers of days at school from 144 last year.
The report, called “Education at a Glance 2015”, took a closer look at the study habits of students in all 34 OECD countries.
It found that while primary school students spend fewer school hours studying each year – 864 hours compared to the OECD average of 804 – France's middle school students actually studied more than average, with 991 hours vs the OECD average of 916.
The report noted that French teachers divided the study time differently to schools in other developed nations.
“French pupils spend more time studying the fundamentals compared to most of their neighbors,” the authors noted, pointing to mathematics, reading, and literacy as prime examples.
Primary school students in France spend 37 percent of their time with “reading, writing, and literacy”, above and beyond the 22 percent average across the countries surveyed, for example.
The pupils put 21 percent of their time into maths, meanwhile, compared to just 15 percent on average for their peers.
The report suggested that France could perform better if it increased resources for the country's disadvantaged areas, specifically by reducing class sizes.
It's unclear at present what bearing the information will have for education officials in France, who have been snowed under with criticism for a sector that was once the pride of the nation.
Indeed, education reforms from earlier this year were so heavily contested that they saw teaching unions protest in the streets, and over 20,000 members of the public and 230 MPs signing a petition for the government to withdraw the bill.
Official statistics have revealed that one in four pupils fails to complete their secondary education successfully, and that the number of students who struggle with basic reading, writing and maths has grown rapidly in the past 15 years.
The social inequalities of the system have increased to the point where the gap between the performance of children from well-off families and poor ones is now one of the biggest in the world, larger than in all other Western European countries or the United States.
READ ALSO: Ten ways France must fix its 'failing' school system