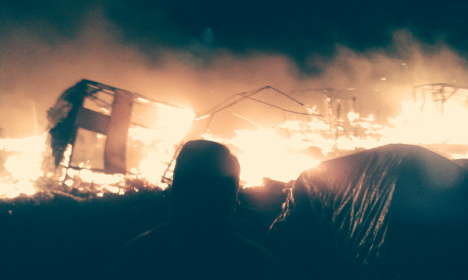 The blaze torched 250 square metres of the camp, which is home to 6,000 refugees. Photo: Private
The fire broke out in the early hours of Sunday morning in the camp, which is home to an estimated 6,000 refugees hoping to cross the Channel to the UK.
Two Eritrean migrants – a 25-year-old woman and a 28-year-old man – were injured in the blaze, which burned down an area of 250 square metres, authorities said.
Leilah Kessler, a volunteer from the UK who was helping out in the camp at the time of the blaze, said there was a mood of fear and horror at the time.
“I was sleeping nearby in a shelter of an Eritrean friend, we were awoken by people banging on shelters and shouting to wake everyone up,” she told The Local. “People were taking all their possessions and they were scared, particularly those with children.”
“The smell was horrific.”
She said that while those near to the blaze were in panic and fear, there was “definitely a sense of 'here we go again'” by others.
The fire is understood to have started in a makeshift kitchen at around 2am, burning through the camp due to strong winds.
According to Marc del Grande, the secretary-general of the local authority or Pas-de-Calais refugees on the scene threw stones at the firefighters who came to extinguish the blaze, Volunteer Kessler said that police and ambulances did not enter the camp, only the firefighters, who arrived around 45 minutes after the blaze broke out.
She said all that remained the next day was “a smoldering waste and the little belongings anyone had”.
The fire marks the third at the camp in less than a month.
The night after the Paris terror attacks, another blaze spread across 2,500 square metres of the camp, though no one was injured. A firefighter confirmed soon after that the fire was in no way connected with the terror attacks and had been sparked by an electrical fault.
In early November, video images emerged showing a huge blaze at the camp, which prompted an explosion that sent people fleeing in panic. See the video from the explosion below.
The fires will no doubt add a sense of insecurity for the migrants, who several NGOs have said in recent months are living in such squalor that it is a violation of human rights.
France was put under additional pressure on Monday to fix the problem, with the country's top administrative court backing an order that forces the French government to improve conditions.
Tensions, meanwhile, remain high in the Calais camp, with refugees and police clashing several times this month.
In desperate efforts to smuggle themselves into vehicles heading to the UK, police claim migrants have been repeatedly placing objects on the roads, leaving police to resort to force in an effort to clear the highways.
Witnesses and police say some refugees hurled stones at police, who responded with tear gas.
Aid groups have also regularly accused the riot police of brutality and overreaction when clashing with the camp's inhabitants.
All photos: Private