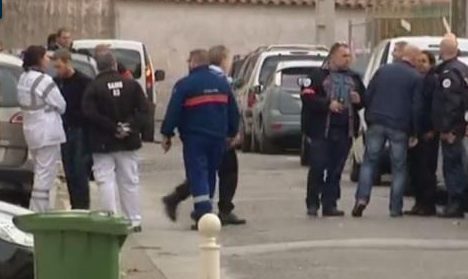 A customs officer was shot dead on Monday in Toulon. Photo: France 3/Screenshot

The shooting occurred in the Saint Jean du Var neighbourhood of the Riviera town of Toulon on Monday morning.

According to reports the shooting happened during an operation to target arms traffickers.

During the raid, a gunman pulled out an M16 assault rifle and began firing on customs officers.

One was killed and another was let seriously injured. There were also initial reports that two police officers were also hurt.

A spokeswoman for France's customs force, known as the Douanes, told The Local that their officers delivered a package containing part of an automatic weapon to the man's address, with the intention of making an arrest.

“He answered the interphone but when he came downstairs to pick up the parcel he just opened fire, killing one officer and seriously injuring another,” said the spokeswoman.

“There was then a short chase with police, during which an officer was injured.”

The man is not thought to have been known to police nor was he the subject of a “File S” fore radicalisation.

“It was a fairly routine operation that we carry out all the time to target drug or arms trafficking,” said the spokeswoman.

A police source told BFM TV the shooter was later arrested although another man is believed to be on the run, although the spokeswoman for France's customs police could not confirm this.

Since the Paris terror attacks on November 13th police have carried out hundreds of raids across the country, many of which have been targeted at arms traffickers, although Monday's operation was not part of this crackdown.

The French government has been under pressure increasing to stop the flood of arms into the country and to prevent them ending up in the wrong hands.

Dozens of weapons have been seized, including a rocket launcher during one raid in Lyon.

In the Paris region alone nearly 300 searches have been carried out, police chief Michel Cadot said on Monday.

He added there were 10,200 police and 6,400 soldiers deployed across the region that includes the capital — prioritising stations, airports, large public spaces, government buildings, cultural sites, media companies and hospitals

“We see a number of messages from Daesh (an alternative name for the Islamic State group) being broadcast on the Internet and which clearly target France.”

Under the heightened security alert, schoolchildren will not be allowed to take part in the UN climate conference which starts next week just outside Paris, he added.