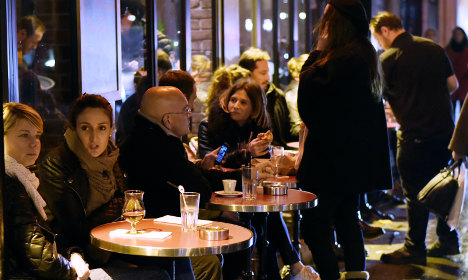 The weekend began with a typical Parisian-style call to arms.

At 21h20 on Friday, exactly one week on from the time the first suicide bomber struck at the Stade de France, Parisians had been urged to make “noise and light” to show the terrorists they would not be cowed.

The orders were followed at Place de le Republique, the square that has become a focal point of resistance and togetherness (as well as a base for the global media).

A huge human chain was formed around the statue, while others danced, rapped or sang along as people took it in turns to play a piano that had been hauled into the square.

The Marseillaise, the French national anthem, was heartily sung as were other ballads like “Hallelujah”.

For a few hours at least, the tension that had fallen over the city since Friday November 13th was released, if ever so slightly.

One week on and with Parisians out in force an important psychological barrier on the road to recovery had been overcome. (People in the Place de le Republique form a human chain to mark one week since the attacks Photo: AFP)

Since the attacks many in Paris have talked about the need for a mass march, as on January 11th, when millions took to the streets in Paris and across France in the aftermath of the shooting of Charlie Hebdo staff, police officers and members of the Jewish community.

But that march is unlikely to take place, not least for security reasons, but also because the atmosphere in Paris is very different this time around.

There is no need to stand up for freedom of speech, the sense this time is that the best and only way to react is to try to carry on as before,

It was French daily life that was targeted, so by carrying on those daily customs of eating, drinking and conversing, the terrorists will get the message that they have not and cannot win.

This was evident on Sunday more than any day since the attacks began.

But that's not to suggest that life has returned to normal and the city is ready to move on.

At Pause Café, just a stone’s throw from le Belle Equipe on Rue de Charonne, where 19 were killed, two armed police stood on guard in front of the sun drenched terrace.

“Why not go here, at least we’ll be safe,” said one man to his friends, half-joking, as they entered the cafe.

Parisians will simply have to get used to the presence of armed police and soldiers outside their favourite haunts for a while to come.

And it will take a while before the relaxed vibe that sets the tone for the atmosphere in Paris's bars and bistros will return, especially with wanted terrorists still on the run and the threat of more attacks higher than ever.

Locals talk of how when they enter a bar now, they instinctively look for places to hide or possible escape routes if they are come under a hail of bullets. (The sight of soldiers patrolling the Metro has become an every day scene in Paris . Photo: AFP)

Others talk of keeping their eyes peeled on the door, checking out everyone who comes into the bar.

Despite the tension and the threat, those living in the city who include people from all over France and those from abroad, talk of a new found pride in a city that may love to malign.

“I was ready to move away, but all those things I used to moan about are gone,” said one young French woman from Provence. “Frankly, I love Paris.”

There is still only one subject on everyone’s minds. The unanswered questions about the attack baffle Parisians just as they have police.

“Why did the Stade de France suicide bombers blow themselves up far from the crowds?” being the main one.

People also talk of the right way for France to respond.

“We need to be more intelligent than just bombing, we can’t counter hate with more hate, that’s what the Americans did after 9/11 and look where it got us,” said one young Parisian.

But while locals are desperate for a return to normality, they are not yet ready to stop grieving for those whose lives were taken by terrorists.

Throughout the weekend, mourners continued to file past the makeshift shrines that have grown at each site of an attack.

On Saturday morning groups of people could be seen visiting the Le Carillon and Le Petite Cambodge to lay flowers and read the messages and poems left among the flowers.

On Sunday night candles were still being lit outside the Bataclan, where police are still having to stop traffic to allow hordes of mourners to pay their respects at the site where 89 were killed ten days ago.

And some in Paris want life to return to normal quicker than others. And quicker than authorities are prepared to allow. On Sunday afternoon leftist and pro-refugee groups gathered in Place de la Bastille, despite a government ban on demos in the aftermath of the attacks.

The defiant protesters headed off in the direction of Place de La Republique and there were scuffles with the police as riot officers tried to prevent them bringing to traffic to a halt.

The street protest was a show of descent against a strained police force, that was widely condemned by authorities, but perhaps a sign that France was indeed getting back to its old self.