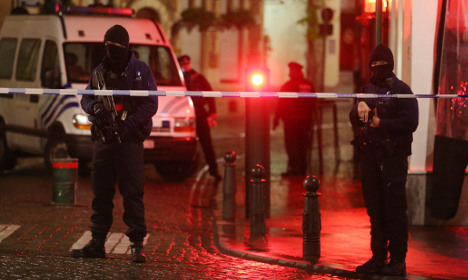 Belgian police arrested 16 people in a wave of anti-terrorism raids but key Paris attacks suspect Salah Abdeslam slipped the net, with Brussels set to remain under security lockdown on Monday.

Schools and the metro will be shut as Brussels stays at the highest possible alert level over what Prime Minister Charles Michel called a “serious and imminent” threat of attacks similar to those that killed 130 people in France.

Police on Sunday carried out 19 raids in Brussels and three in the industrial town of Charleroi, detaining 16 people, prosecutors said, while the driver of a car was injured after police fired two shots when the vehicle drove at officers.

Abdeslam's elder brother Brahim blew himself up outside a Paris bar in the November 13 attacks.

No arms or weapons were found in the raids, prosecutors added. Armed officers and troops have been patrolling the near deserted streets of the tense Belgian capital all weekend after the government raised the terror alert to the highest level of four in the city.

The European Union and NATO, which are based in Brussels, both said they would increase security and urged non-essential staff to work from home on Monday.

Michel said the Brussels metro system would remain shut and schools and universities would be closed over concerns that jihadists were planning a repeat of the Paris gun and suicide bombing attacks on November 13.

“What we fear are similar attacks, with several individuals in several places,” Michel told reporters.

“The threat is considered serious and imminent,” he said, adding that the rest of the country, including Brussels airport, would remain on security alert level three, meaning an attack is considered possible and the threat credible.

Officials will review the situation again on Monday.

historic Grand Place square in central Brussels, usually bustling, was virtually empty at the weekend, with business badly hit in the run-up to Christmas as anxious residents heeded warnings to stay home.