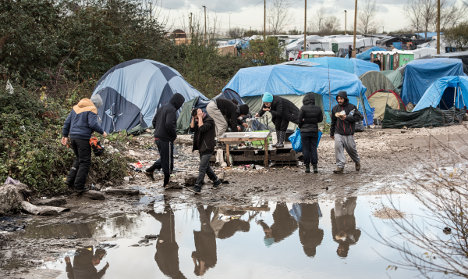 Migrants at the Calais Jungle. Photo: AFP
France's Council of State rejected on Monday the appeal from the French government, meaning the département of Pas-de-Calais and the town of Calais must work to improve life for the 6,000 migrants who live at the camp.
The body noted that the living conditions at the slum were “very likely to expose migrants to inhumane or degrading treatment”.
The council's decision backs an earlier judgement by a court in Lille that ordered France to install ten more water stations – with five taps each, 50 latrines and “one or several” more access points to emergency services.
Doctors of the World (Medecins du Monde) and Catholic Relief Services, as well as other NGOs, has appealed to the court to “end serious human rights violations” of the migrants living in the camp where the number of inhabitants has nearly doubled since the end of September. The so-called “New Jungle” camp, which is around an hour away on foot from the centre of the northern French city, has swelled in size over recent months as more and more migrants arrive, wanting to cross over to Britain.
Along with the new sanitation stations, the administrative court had ordered the installation of garbage collection sites and general cleaning of the camp.
The Doctors of the World director for France, Jean-Francois Corty, told The Local earlier this month that “conditions in the camp continue to be untenable and the state continues to react too slowly to the situation.”
Earlier this month, work got underway on another separate project got underway on new heated shelters for the migrants in the camp.
The project, announced by Prime Minister Manuel Valls in August, will be paid for by France and the European Union and will create accommodation for around 1,500 people.