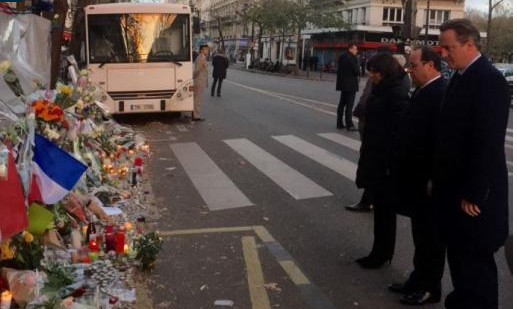 British Prime Minister David Cameron on Monday pledged his support for France's stepped-up efforts to bomb Isis
jihadists in Syria after the Paris attacks, and said he believed Britain should take similar action.

“I firmly support the action President Hollande has taken to strike ISIL in Syria,” Cameron said after talks in Paris, adding: “It's my firm conviction that Britain should do so too.”

He then stated he had offered Hollande the use of the British base in Cyprus so the French could launch more air strikes on targets in Syria.

“Today I've offered President Hollande the use of RAF Akrotiri for French aircraft engaged in counter-ISIL operations and additional assistance with air-to-air refuelling,” Cameron said in a statement to reporters alongside Hollande, using another term for IS.

Earlier Cameron and French President Francois Hollande on Monday visited the Bataclan concert hall in Paris where 90 people were killed by jihadist attackers.

Cameron said on his Twitter account he had stood “shoulder to shoulder” to Hollande at the venue, where a British man was among the dead on November 13.

Cameron and Hollande, who were also joined by Paris mayor Anne Hidalgo, placed a rose among the flowers at the makeshift shrine outside the venue.

President Hollande and I stood shoulder to shoulder outside the Bataclan Cafe in Paris. pic.twitter.com/prDbxIFy5u

Cameron was in Paris on Monday to discuss the fight against terrorism and the Syrian crisis, his office said Saturday. He held a breakfast meeting with Hollande at the Elysée Palace where they discussed the threat of Isis and how to react.

In an article in the Daily Telegraph on Monday, he wrote that the Paris attacks showed that IS “is not some remote problem thousands of miles away; it is a direct threat to our security”.

And on Monday Cameron again showed his support for bombing, but is yet to announce a vote in parliament.

For his part Hollande said France will intensify air strikes, “choosing targets that will do the most damage possible to this army of terrorists”.

The meeting opens a week of intense diplomatic exchanges in which Hollande will meet with US President Barack Obama, Russia's Vladimir Putin and German Chancellor Angela Merkel.

The flurry of meetings comes in the wake of France's worst-ever terror attack which left 130 dead and has exposed holes in European intelligence and border security.

The attacks prompted both France and Russia to step up air strikes against Islamic State jihadists in Syria, while pledging to work closer together in combating the group.

IS claimed both the Paris attacks and the downing last month of a Russian plane over Egypt, killing 224 people.