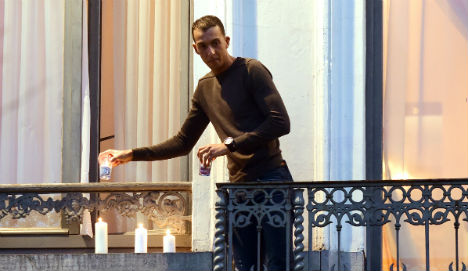 Mohamed Abdeslam lights candles outside his family apartment during a candlelight vigil in Brussels' Molenbeek district. Photo: Emmanuel Dunand/AFP
Belgium has launched a huge manhunt for the 26-year-old who is believed to be the only surviving member of the gang of jihadists behind the massacre in the French capital.
Asked about the possibility that Salah had balked, his brother Mohamed Abdeslam told RTBF television: “That is more than my hope, it is my conviction.”
“He was a very intelligent man and I believe that at the very last moment he changed his mind and decided to take a different path.”
In all, seven attackers died in the Paris onslaught, including Brahim Abdeslam, a third brother who blew himself up outside a bar.
“I am totally convinced that my brothers were not radicalized but that they were manipulated,” Mohamed said.
Belgian-born Salah Abdeslam may be equipped with a suicide belt, according to Hamza Attou, one of two suspects charged by Belgian authorities for allegedly helping him return to the country after the killings.
The attacks claimed by the Isis extremist group left 130 people dead, hundreds more seriously injured and France and Europe in a state of shock.
One of the lingering questions is exactly what role Abdeslam — who use to run a bar with Brahim in Brussels — played in the bloodshed.
Mohamed Abdeslam told RTBF that the family wanted Salah to give himself up.
“That way he can give us the answers we seek, our family and the families of the victims,” he said. “We would rather see Salah in prison than in the cemetery.”
Url copied to clipboard!