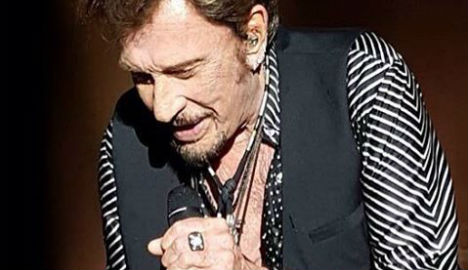 Johnny Hallyday at a concert in November. Photo: Instagram/Johnnyhallyday.com
“If I weren't a singer, I would pick up a weapon and go fight them,” the 72-year-old musician told Le Parisien newspaper after the attacks, which were claimed by the Isis group.
Often referred to in the British media as “the biggest star you've never heard of” because his appeal is anchored in the French-speaking world, Hallyday said he first found out about the November 13 attacks as he came off stage that night.
“I felt a deep discomfort. The next day I started feeling unwell,” said Hallyday, who has been dubbed the “French Elvis”.
The day after the attacks, he posted a message on Twitter: “I am so sad this weekend. My thoughts are with the victims' families.”
“People I knew died in the Bataclan,” he told Le Parisien, referring to the concert venue where Californian rock group Eagles of Death Metal were playing and which was the scene of the worst bloodshed the night of the attacks.
“We must show the assassins that we aren't afraid, that we will keep on living,” he added.
The singer cancelled a concert in Belgium on Saturday when the terror threat level in Brussels was raised to the highest possible level.  He has however pledged to return to the Belgian capital next March.
Url copied to clipboard!