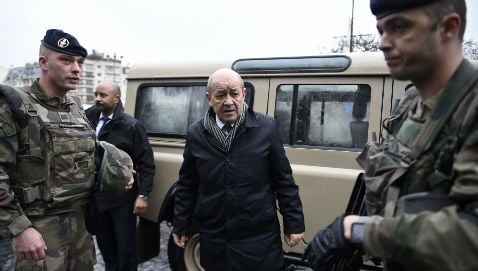 French defence minister Jean-Yves Le Drian visits French troops outside the Italy Deux shopping centre on Friday. Photo: Lionel Bonaventure/AFP
He said French authorities were not ruling anything out in the wake of the Paris attacks even though it was “very complicated” for anyone to use chemical weapons.
“All the precautions have been taken to avoid this kind of risk,” Le Drian told Europe 1 radio.
Prime Minister Manuel Valls had on Thursday said that an attack using chemical or biological weapons was possible.
“We must not rule anything out… There is also the risk from chemical or biological weapons,” Valls said in the aftermath of the shootings and suicide bombings on November 13 that killed 130 people.
The government on Saturday issued an authorisation for the army's pharmacies to distribute an antidote for chemical weapons to civilian emergency services in France, ahead of a major UN climate summit in Paris that
will bring together world leaders beginning November 30.
Le Drian meanwhile said French jets would be able to launch air strikes on Islamic State targets in Syria from the Charles de Gaulle aircraft carrier in the eastern Mediterranean from Monday.
“It will be operational from tomorrow,” the minister said.
France has stepped up air strikes against Raqa, ISIS's de facto capital in Syria, since the day after the Paris attacks that were claimed by the jihadist group.
The fight against the jihadists is “both a war in the shadows and a war on the battlefield,” Le Drian said.
It will involve battling a well-organised, brutal force that controls large parts of Syria and Iraq, and “an international terrorist movement that is seeking to strike the Western world”.