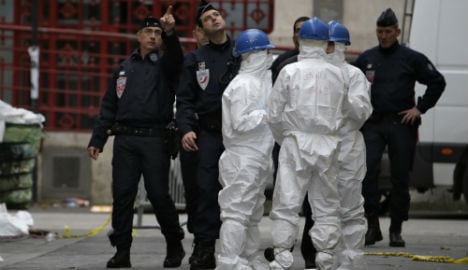 Police on Thursday during the search of the apartment building in St Denis. Photo: Kenzo Tribouillard/AFP
However Jawad Bendaoud, who has admitted lending the apartment to two people from Belgium “as a favour” but denied knowing any more, is being held in custody.
Five days after 130 people were killed in France's worst-ever terror attack police closed in on suspected ringleader Abdelhamid Abaaoud in an apartment in Saint-Denis north of Paris.
A source close to the investigation told AFP it was Abaaoud's cousin Hasna Aitboulahcen — killed with him in the raid — who unknowingly led them to the apartment.
The source said a witness had reported seeing Aitboulahcen with two men, one of who resembled Abaaoud after the attacks on Friday night. The young woman was immediately placed under surveillance.
On Tuesday she was seen talking to a man in what the source believes was a conversation to negotiate the accommodation of Abaaoud and a second man.
She then went to pick up the two men, hiding in nearby Aubervilliers in an area home to many warehouses near the highway.
Aitboulahcen took the men to an apartment in Saint-Denis, and police launched their assault at 4:20 am the next morning.
A violent gunfight in which police launched 5,000 rounds of ammunition at the heavily-armed group holed up in the apartment left both Abaaoud and Aitboulahcen dead. A third person, who blew themselves up in the raid, has yet to be identified.
Four people were arrested inside the building and three others outside, including Bendaoud and a woman in his company.
“A friend asked me to put up two of his friends for a few days,” Bendaoud told AFP before being led away by police.
“I said that there was no mattress, they told me … they just wanted water and to pray,” Bendaoud said before being handcuffed and led away by police. I was asked to do a favour, I did a favour. I didn't know they were
terrorists.”
Bendaoud has previously been in prison for beating someone to death. The woman with Bendaoud said the apartment was not his, but was “a kind of squat” he ran after forcing the door open.