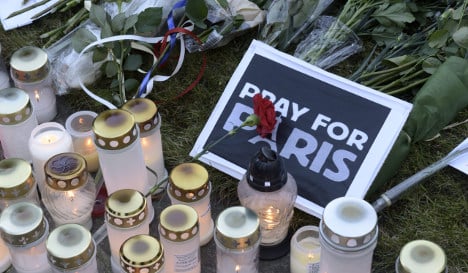 “Pray for Paris” – a phrase born out of the tragic terror attacks in the capital city on Friday – has moved from mournful posts on social media and into the world of merchandise.

The saying, as well as as a drawing by French graphic designer Jean Jullien, can now be found on mugs, stickers and tank tops, raising questions about how much mainly online retailers are profiting from the loss of 129 people.

Some stores advertise that a percentage of sales will go to victims, but such claims can be hard to verify. Others don’t mention donations at all.

As Vice France points out, some stores have followed through on promises to give back. A shop named Pray for Paris, which was launched in 2011, stopped all sales on November 14th after the attacks and will send 20 percent of its profits to the Red Cross.

EBay also said it would donate 5 percent of revenue on the European market made on the Saturday and Sunday following the attacks to victims and their families.

And online shop Zazzle told Vice France that after much criticism, it decided to withdraw “products linked to the tragedy”.

But others are also trying to turn a buck from the tragedy in more indirect ways. The hashtag #PrayforParis has been used more than 6.5 million times on Instagram, but a scroll through those posts shows many using the tag simply to promote products – or themselves – rather than to express grief.

Some products seem somewhat related, with depictions of the Eiffel tower or the French flag, but others seem to simply use to tag to latch onto the trending topic.

Profiting from tragic events is not something new, especially after terrorist attacks. The creator of the slogan “Je Suis Charlie”, Joachim Roncin, told Le Figaro that he found it “horrible” when the phrase began to be used for commercial purposes after the attack on the satirical magazine in January.

“Some people have no respect.” Roncin said at the time. “I am sad.”