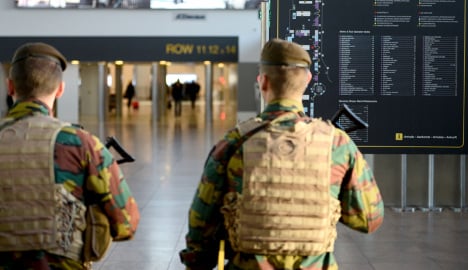 The prosecutor's office told AFP the raids targeted places “linked to Bilal Hadfi,” the 20-year-old who died when he set off his explosives on Friday, in Brussels as well as the suburbs of Uccle, Jette and Molenbeek, which is dubbed a haven for extremists.

The prosecutor added that the raids targeted places involving Hadfi's family, friends and other people directly linked to him.

Hadfi was one of three assailants who blew themselves up outside the French national stadium, killing one person, as France was playing Germany in a football friendly attended by 80,000 fans, including French President Francois Hollande.

Investigators say Hadfi was a French national who was living in Belgium and had spent time in Syria.

“It's a case which has already existed in 2015, following Mr. Hadfi's departure for Syria,” a source in the prosecutor's office said.

Police also detained one person in a separate raid in Laeken, a suburb northwest of Brussels, in connection with the Paris attacks but not with Hadfi, the source added.

The person's role in the attacks “remains to be seen,” the source said.