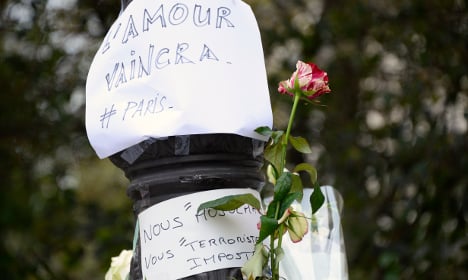 “I'm Muslim and I'm not a terrorist”

This was the simple, straight to the point message posted on the bullet hole riddled window of the Le Carillon bar, where jihadist gunmen mowed down several young people enjoying a night out on November 13th.

Another message scrawled on paper and pinned to another wall of the popular bar reads: “We Muslims, You, terrorist impostors”. These two messages suggest that once again terrorists have left ordinary Muslims fearful that the grief and anger felt by so many in Paris and France could become anti-Islam sentiment.

It has also made many of them feel they have to defend both themselves and their religion.

One of those people is Mohammed Mraizika, Secretary General of the Union of Mosques of France (UMF).

“The attacks in Paris were abominable and they affected all citizens, whatever their colour, creed or religion,” Mraizika told The Local this week, noting that several Muslims were among the dead.

But statements like this may not be enough to quell the anger of some, especially those on the far right in France, who are resistant to the influence of Islam in the country.

In the aftermath of the January terrorist attacks on the offices of Charlie Hebdo and the Jewish store the number of Islamophobic incidents across France rocketed.

Mosques were attacked with graffiti scrawled across their walls and Muslims reported a rise in abuse.

The French government and Muslim leaders are aware that a similar reaction to Friday's bloodshed is distinctly possible.

On Wednesday President Hollande urged the nation not to “give in to fear” or excessive reactions in the wake of the attacks. Meanwhile, the body representing Muslims in France, the French Muslim Council, said it would ask all 2,500 mosques in the country to condemn “all forms of violence or terrorism” at Friday prayers.

Muslims have also been urged to join an “anti-terror” protest on Friday at the Grand Mosque in Paris, where the rector Dalil Boubakeur has voiced his “horror” at the “unspeakable acts”.

But despite the condemnation from within the Muslim community and lack of blame for the barbaric deaths being attached to Islam from most of those outside, there have already been reports of Islamophobic incidents since Friday's attacks.

On Wednesday, a young woman in a headscarf was attacked as she was leaving a metro station in central Marseille by a man whom she said accused her of being a terrorist.

She was punched in the chest and hit with an object thought to have been a box cutter.

Members of the Muslim community in the 18th arrondissement of Paris told The Local people are on edge.

“We aren't feeling too secure right now,” said a 30-year-old man named Adlan. “This is about Syria. But I'm worried that there are French people who don't understand this. But it's hard to accept anything when 129 people have been killed.”

But some in the community stress there is a difference to the feeling and anger post Charlie Hebdo attacks, when the barbarity of the killings was shrouded in a debate about freedom of speech and whether or not drawing a cartoon of Mohammed was the right way to exercise it.

“This time there was no revenge motive, this time they just attacked anything that symbolized France. Daesh (Isis) are terrorists with a fascist ideology,” said Mraizika from the UMF. Muslims are distinctly aware that the division that the terrorists seek to open up in French society, and within their own religion, could easily occur with the help of far right.

“There are politicians in France who will seek to exploit these attacks and to attack Islam and social cohesion,” the secretary general of UMF said. “We are telling people not to cede to provocation.”

“But we must work hard together, all of us against Deash, whatever our religion, our colour or language. We are all affected by a terrorism that has no values and is just against life.”

“The state must fight Daesh and the Imams in mosques must work hard to show what happened has nothing to do with Islam. Everyone has to take responsibility.”

There have been renewed calls, including from the French Prime Minister to expel radical preachers and close down mosques that have been taken over by extremists.

Mraizika and his organisation have thrown his support behind those measures.

“We are in 100 percent agreement. Preachers of hate should be expelled and mosques closed, France has the powers to do this,” he said.

“Muslims don't have the legal means, but we have the ideological means and we must fight them.”

Mraizika’s call was echoed, albeit in slightly different language by the French Muslim blogger Chronic 2. His appeal to Muslims, filmed on his mobile phone and posted on Facebook has been viewed 3.2 million times in under 24-hours.

“Muslims of France we need to protect our beautiful religion and hunt down these imposters who are passing for Muslims and killing people.