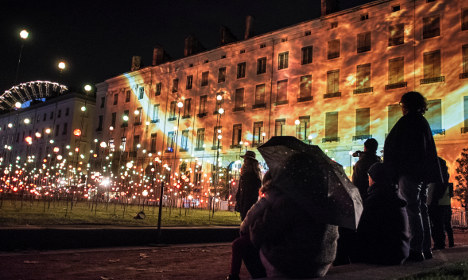 Photo: AFP
The four-day event was scheduled begin on December 5th, with organizers expecting up to 3 million visitors.
Lyon mayor Gérard Collomb told the assembled media that the event would be replaced with a day of tribute on December 8th.
“For me, not putting Lyon residents at risk does not mean the terrorists have won,” he tweeted later.
“There will still be thousands of lights on across Lyon. The whole city will be lit up,” he told BFM TV.
Local prefect Michel Delpuech added that the event would have required a mobilization of police to the maxium level, which was simply unfeasible for a four-day period.
It's not surprising that such a popular event has been cancelled, not least considering the national state of emergency means all large public gatherings have been banned. The emergency measures were voted by lawmakers on Thursday to remain in place for three months.
The Festival of Lights is the biggest drawcard of the year for Lyon, and usually sees millions on hand to watch dozens of spectacular light shows and installations illuminating the skies over the historical city.
In its stead, the city of Lyon will sell 200,000 lanterns with proceeds going towards the victims of the Paris attacks, and childrens' charities.
Friday's terror attacks in Paris saw 129 people killed, mostly at the Bataclan concert hall, but also at a series of restaurants and bars across the city.
Url copied to clipboard!