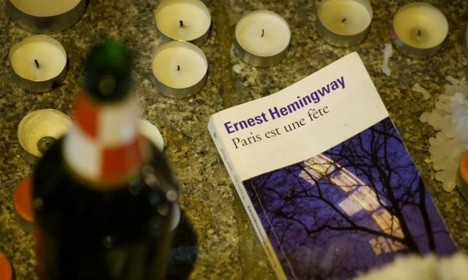 A Moveable Feast - called "Paris est une fête" in French. Photo: Pierre Tremblay/Twitter
Among the heaps of flowers and thousands of candles at the sites of last week's shootings, some Parisians are leaving copies of “A Moveable Feast”, a 1964 novel by American author Ernest Hemingway.
The book, a memoir of the author's life in the French capital, has become something of a symbol for the post-terror solidarity, largely thanks to the words of a 77-year-old Parisian who was interviewed by French channel BFMTV
“It's very important to bring flowers for our dead,” said the woman, named only as Danielle. She added that it was also important to see Hemingway's memoir of his life in Paris “because we are a very old civilization and we will uphold our values at the highest level”.
“We will fraternize with five million Muslims who practice their religion freely and kindly and we will fight the 10,000 barbarians who kill, supposedly in the name of Allah,” she said.
By Thursday, the novel had shot to second place on the French Amazon best-seller list. A spokesperson for the publishing house responsible for the book told the French Huffington Post that only around ten copies of the book are usually sold each day in France – but numbers are currently at around 500 per day.
He added that the publishers have scheduled an extra 15,000 to be printed.

Danielle, meanwhile, became a viral sensation in her own right after a Toulouse-based man started a campaign to track her down and send her flowers. The man launched a campaign to raise money for the flowers, attracting over €13,000 from more than 1,600 people.
A hashtag translating to “Flowers for Danielle” was trending across the country earlier in the week.
The 77-year-old received what she called a “magnificent” bunch of roses on Tuesday, asking for the rest of the money to be donated to a good cause.
The 1964 novel is based on Hemingway's life as an expat writer in Paris back in the 1920s. It was published posthumously, three years after his suicide, and features his interactions with people like F Scott Fitzgerald, Ezra Pound, and James Joyce.
The phenomenon recalls the sales spike for Voltaire's 18th century “Traite de la tolerance” (“Treatise on Tolerance”) which occurred in January following the attack on the Paris offices of satirical weekly Charlie Hebdo.

“Wherever you go for the rest of your life, it stays with you, for Paris is a moveable feast.” -Hemingway