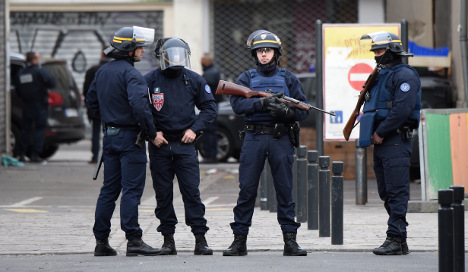 Police stand guard after the raids in a Paris suburb on Wednesday. Photo: Eric Feferberg.

Gunfire and explosions rocked the Saint-Denis area in the north of the city, near the Stade de France stadium, from before dawn as terrified residents were evacuated or told to stay in their homes.

Authorities arrested seven people and five police officers suffered minor injuries in the operation – a seven-hour stand-off between security forces and a group of people holed up in an apartment.

Black-clad elite police were seen hauling away a naked suspect in the streets near where three suicide bombers blew themselves up outside the football stadium at the start of Friday's attacks.

After the raid, white-suited forensic experts swarmed the building as police tried to verify if Abdelhamid Abaaoud, the suspected mastermind of Friday's attacks in Paris that killed 129 people, had been in the apartment.

Paris prosecutor Francois Molins said a probe into the attacks allowed police “to obtain telephonic surveillance and witness testimony which led us to believe that Abaaoud was likely to be in an… apartment in Saint-Denis”.

However, Molins added it was too early to say if he was among those arrested or killed.

Abaaoud is an Isis fighter who was previously thought to be in Syria after fleeing raids in his native Belgium earlier this year.

Residents of the Paris suburb, some of whom were evacuated in their underwear, said they had been caught in a terrifying exchange of fire.

A passerby raises his arms in fron of police during the raids. Photo: Kenzo Tribouillard

Hayat, 26, had been leaving a friend's apartment where she had spent the night when the shots erupted.

“I heard gunfire,” she said. “I could have been hit by a bullet. I never thought terrorists could have hidden here.”

Seven jihadists were killed or blew themselves up in the attacks on the stadium, a concert hall, bars and restaurants that were claimed by the Isis group operating in Iraq and Syria.

All of those killed in the attack have now been identified, a statement from the French cabinet said.

Police are hunting for two other individuals, including 26-year-old Salah Abdeslam, suspected of taking part in the attacks with his suicide-bomber brother Brahim.

The attack is unprecedented in France, which was shaken to its core for the second time in a year after a three-day jihadist killing spree that left 17 dead on January.

French President Francois Hollande praised security forces for their role in “the particularly perilous and taxing” operation which he said proved the country was involved in a “war against terrorism”.

He told a gathering of mayors that municipal police would be given more weapons and equipment from the stock of the national police.

But Hollande urged the nation not to “give in to fear” or excessive reactions in the wake of the attacks.

The body representing Muslims in France said it would ask all 2,500 mosques in the country to condemn “all forms of violence or terrorism” in prayers this Friday.

The message will condemn such acts “unambiguously”, the French Muslim Council said.

France is still under a state of emergency which lawmakers will vote to extend on Thursday and Friday.

As police stepped up the hunt for the fugitives, French and Russian jets pounded Isis targets in the group's Syrian stronghold of Raqa for a third consecutive day.

A monitoring group said the air strikes had killed at least 33 Isis jihadists in the last 72 hours.

France and Russia have vowed merciless retaliation for the Paris attacks and last month's bombing of a Russian airliner over the Egyptian Sinai peninsula which killed 229 people and was also claimed by IS.

The French aircraft carrier Charles de Gaulle left the southern port of Toulon on Wednesday for the eastern Mediterranean to participate in intensified air strikes against Isis targets.

Russian President Vladimir Putin said Tuesday that “it is necessary to establish direct contact with the French and work with them as allies”.

The attacks have galvanised international resolve to destroy the jihadist group and end Syria's more than four-year civil war, while potentially restoring ties between Russia and France that had collapsed since last year's Ukraine crisis.

Highlighting US fears over the attack, two Air France flights bound for Paris from the United States were diverted Tuesday and landed safely after anonymous threats that the carrier described as a “bomb scare”.