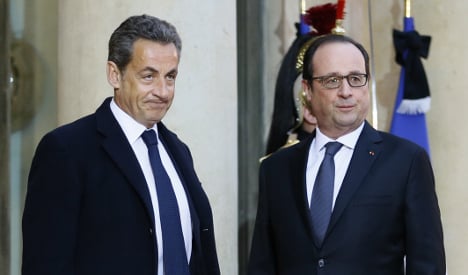 The latest attack on Friday night which left 129 people dead has increased political tensions just weeks ahead of regional elections, and the brief semblance of national unity has quickly frayed.

“How many victims must there be before we use the word (failings)? Were all the implications considered after the January attacks? The answer is no,” Sarkozy asked in an interview with Le Monde newspaper.

“Too much time was wasted,” said the man hoping to take another run at the presidency in 2017 polls.

“Nor did the government draw all the right conclusions about the impact of our military intervention in Syria on internal security,” said Sarkozy, who himself led a French intervention in Libya in 2011.

He said anti-terrorist measures should have been boosted immediately.

The January attacks on Charlie Hebdo magazine, police and a Jewish supermarket killed 17 people, and there have been several foiled attacks since.

They have been used as political ammunition by France's right, especially far-right leader Marine Le Pen.

She said Hollande's government “should have resigned” after the attacks.

The security fears, as well as Europe's immigration crisis, are expected to boost the right-wing's takings in the regional polls.

While on Monday both houses of parliament stood to sing the national anthem after the attacks, the show of national unity quickly unravelled as Prime Minister Manuel Valls was booed in the house on Tuesday.

Valls got a standing ovation from his own party when he asked “patriots to come together to combat terrorism.”

“It's too late,” shouted a lawmaker with Sarkozy's The Republicans party from the benches.

Christian Estrosi, deputy mayor of Nice, was then booed by the left in the rowdy session as he said: “Why must so much blood and tears be shed so that you hear us?”

Government representatives, including Justice Minister Christine Taubira and Health Minister Marisol Touraine, were hit by a volley of boos before they could even begin talking.

The government has been forced to defend itself once again after it emerged several of the jihadists had been known to security forces.

Interior Minister Bernard Cazeneuve said there had been no intelligence failures, and that “zero risk” does not exist, saying that 115,000 police and soldiers had been mobilized across the country.

Meanwhile, former prime minister Alain Juppe, who is also seeking to become The Republicans' presidential candidate, has said Sarkozy was wrong to do away with 13,000 positions in the security forces during his presidency.