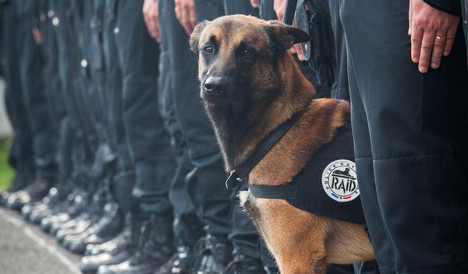 “Diesel, a seven-year-old Belgian Shepherd, a female assault dog … was killed by terrorists during the operation,” according to the Twitter account of France's police.

“Assault and explosives detection dogs are vital in the operations of RAID”, said the specialist anti-terrorist unit of the French police which launched the dawn assault targeting the suspected mastermind of Friday's attacks in Paris.

The hashtag #JeSuisChien (I am a dog) was trending on French Twitter after the announcement.

Two suspected jihadists were killed during the raid which saw automatic gunfire and explosions ring through the working class suburb since 4:00am.

One of them was a woman who detonated an explosives vest.

The operation comes as part of a manhunt to find any links to the devastating string of attacks on Friday that left 129 dead and hundreds injured in a concert hall, bars and restaurants and outside France's national stadium.