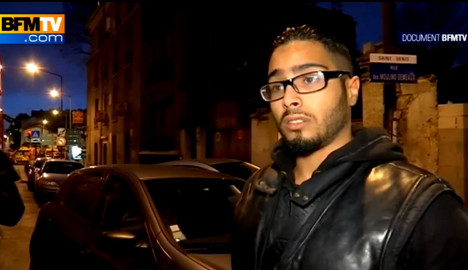 Photo: Screengrab of BFMTV interview with Jawad Bendaoud, the man who said he loaned out his flat, which was raided by police on Wednesday

“A friend asked me to put up two of his friends for a few days,” Jawad Bendaoud told AFP.

The apartment was targeted by police hunting the mastermind of the Paris attacks last Friday that killed 129 people and left more than 350 injured.

“I said that there was no mattress, they told me 'it's not a problem', they just wanted water and to pray,” Bendaoud said before being handcuffed and led away by police.

He said his friend told him the men came from Belgium, where according to investigators several of the jihadists were known to have lived.

“I was asked to do a favour, I did a favour. I didn't know they were terrorists.”

Prosecutors said Bendaoud served five years of an eight-year prison sentence for beating someone to death.

A woman friend of Bendaoud who was also taken into custody by police told AFP she had slept in the apartment last week and the dwelling was “a kind of squat.”

The two were among seven people held by police during the raid on the apartment, which left two suspected jihadists dead, including a women suicide bomber.

The operation comes as part of a manhunt for those involved or accomplices to the worst-ever terror attack on French soil.

Isis jihadists claimed to be behind the coordinated attack on the Stade de France, a rock concert, bars and restaurants.

The French national stadium where three suicide bombers blew themselves up, killing one person, is close to the apartment raided by police.