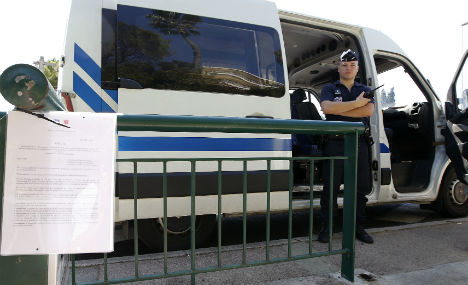 A teacher at a Jewish school in the southern French city of Marseille was stabbed Wednesday evening by three people shouting anti-Semitic obscenities and expressing support for the Islamic State group, local authorities said.

The attack on the teacher took place around 8:00 pm (1900 GMT) in the city's 13th district, police prefect Laurent Nunez said.

The 57-year-old victim, who was wearing a kippa, was attacked outside his home, a short distance from the school and synagogue complex, a source close to the investigation said.

The attackers who were travelling by scooter demanded he look at smartphone pictures of Toulouse jihadist Mohamed Merah, who shot dead three Jewish schoolchildren, a teacher and three soldiers in southwestern France in 2012, Marseille public prosecutor Brice Robin told AFP.

They also “showed him a t-shirt with the logo of Daesh (an acronym for Islamic State)” before lunging at him with a knife, injuring him in the arms, legs and stomach, Robin added.

The teacher, who escaped serious injury, was taken to hospital as officers fanned out across the district to search of the attackers, who fled when a police patrol arrived in the area.

“I'm very shocked. because this is the second incident of its kind in a very short time,” Michele Teboul, the regional president of the Jewish representative group CRIF told AFP, adding she was “worried” about the threat of further attacks.

Last month, a man rounded on three Jews, stabbing one of them, near the same school and synagogue.

He too uttered anti-Semitic slurs.

Wednesday's stabbing comes as France is on high alert following the Islamist attacks that killed 129 people in Paris on Friday.

The terror attacks, which were claimed by the Islamic State jihadist group, were the worst in French history.

Parliament is due Thursday to begin debating a three-month extension of the state of emergency declared over the violence.

On Wednesday, a young woman in a headscarf was attacked as she was leaving a metro station in central Marseille by a man whom she said accused her of being a terrorist.

The attacker, who was in his twenties, was said to have made remarks about her headscarf before punching her and hitting her with an object suspected of being a box cutter. She was lightly injured in the chest.

French President Francois Hollande called on Thursday for a “merciless” response to both of the Marseille attacks.
“We will not accept anything that would suggest that a single individual, a single citizen in our country could be attacked because of their religion confession,” he added.