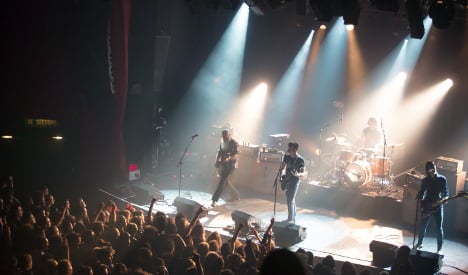 The US band Eagles of Death Metal performing in Paris, moments before the concert hall was stormed by terrorists. Photo: Marion Ruszniewski / Rock&Folk / AFP

The California rock band, in its first full statement since Friday's bloodbath, said it was “horrified” and “still trying to come to terms with what happened”.

“Although bonded in grief with the victims, the fans, the families, the citizens of Paris, and all those affected by terrorism, we are proud to stand together, with our new family, now united by a common goal of love and compassion,” the band said in a statement.

The band, which confirmed it had returned home, said it was suspending shows until further notice.

The concert venue experienced the deadliest carnage in a series of simultaneous attacks around Paris that left a total of 129 people dead and more than 350 injured.

The band itself left safely but the statement mourned  Nick Alexander, a British merchandise vendor for the group who was killed, as well as three slain employees of its Universal record label, Thomas Ayad, Marie Mosser and Manu Perez.

Eagles of Death Metal are known for free-spirited garage rock and raunchy humor, but are not generally known for politics.

While it remained unclear whether the band was singled out, Eagles of Death Metal had earlier defied boycott calls and performed in Israel.