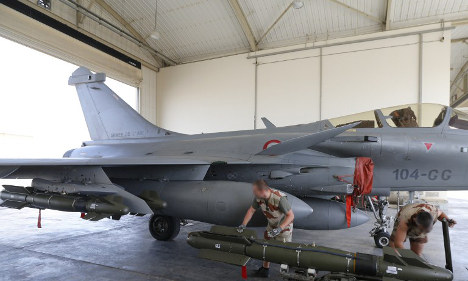 French soldiers prepare a Rafale fighter jet at an undisclosed location in the Persian Gulf on Tuesday as the French army conducts operations against Isis in Syria and Iraq. Photo: AFP

Dozens of Isis fighters were also wounded in the raids on weapons depots, barracks and checkpoints in the jihadists' de facto Syrian capital of Raqa, said Rami Abdel Rahman, director of the Britain-based Syrian Observatory for Human Rights.

France intensified strikes on Raqa following last week's attacks in Paris that left 129 dead, with warplanes carrying out dozens of raids on Sunday, Monday and Tuesday.

Russia also pounded Raqa with long-range bombers and sea-launched missiles on Tuesday, after Moscow confirmed that a bomb attack brought down a Russian passenger jet over Egypt last month, killing all 224 people on board.

“The limited number of deaths can be explained by the fact that the jihadists had taken precautions,” said Abdel Rahman, who relies on a network of activists, medics and other sources inside Syria.

“There were only guards around the depots and barracks and most of those killed were at the checkpoints,” he said.

He said many families of foreign fighters had also left the city for Mosul in Iraq, another stronghold of Isis, which has seized control of large parts of Syria and Iraq.