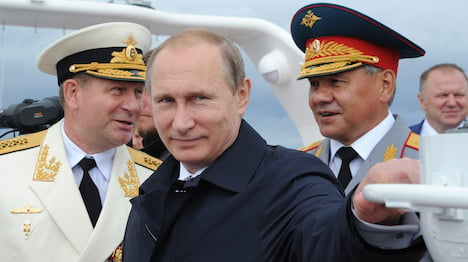 Vladimir Putin inspects Russian naval ships in Kaliningrad earlier this year. Photo: Mikhail Klimentyev/Ria Novosti/AFP
President Vladimir Putin on Tuesday ordered the Russian navy in the Mediterranean to establish contact with its French counterparts and work together “as allies” against Isis in Syria.
“It's necessary to establish direct contact with the French and work with them as allies,” Putin told the military top brass at a meeting after French President François Hollande said the French aircraft carrier Charles de Gaulle would be deployed to the eastern Mediterranean.

The news came after the Kremlin announced that Putin and Hollande had agreed to step up cooperation between their military and intelligence services in Syria, following the attacks in Paris and bombing of a Russian plane.

“It has been agreed to assure closer contact and coordination between the military and security service agencies of the two countries in actions against terrorist groups by Russia and France in Syria,” the Kremlin said in a statement following a phone call between Putin and Hollande.