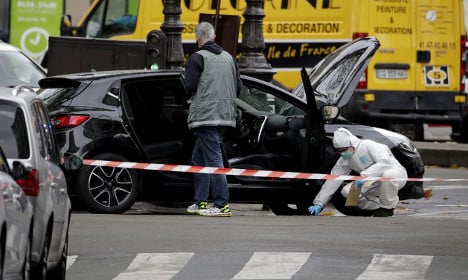 The car found in the 18th arrondissement of Paris. Photo: AFP

A car rented by Paris attacks suspect Salah Abdeslam that may have been used in the preparation of the carnage was found
Tuesday in a northern district of the capital, police sources told AFP.

The “car was rented by Salah Abdeslam”, who is wanted under an international arrest warrant on suspicion of involvement in the vicious attacks that left 129 people dead four days ago.

“A black (Renault) Clio found… in the 18th district may have been used in the preparation of the attacks,” one source said.

“The car was seen on the A1 motorway as part of what may have been preparatory contacts between groups in Paris and Belgium,” the source added.

Another source said further analysis by forensic investigators was needed to determine whether the car was involved in the attacks.

It was found parked partly over a pedestrian crossing and has Belgian number-plates, an AFP journalist said.

After checking the vehicle was not booby-trapped, it was towed away by police for further examination.

Two other Belgian-registered vehicles have been linked to the Paris attacks Friday that left 129 people dead.