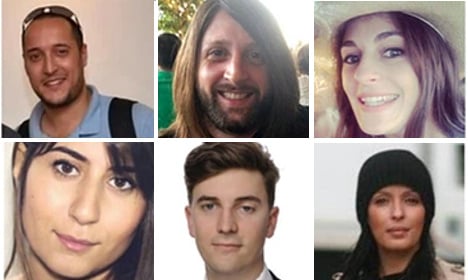 129 people were killed in the Paris attacks.
When jihadist gunmen opened fire in the French capital they sliced through lives from over a dozen countries and walks of life, ranging from students to lawyers, with most of the victims in their 20s and 30s.
“The France that the attackers wanted to kill was youth in all its diversity, with most of the dead under the age of 30,” French President Francois Hollande told lawmakers on Monday.
“Their names were Mathias, Quentin, Nick, Nohemi, Djamila, Helene, Elodie, Valentin and I'm forgetting so many others. What was their crime? Being alive.”
One was 35-year-old Elsa Delplace, who went to see the Eagles of Death Metal rock performance at the Bataclan music venue with her mother Patricia San Martin, 61, as well as her five-year-old son.
Both women, who were Chilean, were killed in the assault while the boy managed to escape.
Elsewhere in the crowd at the Bataclan, Nicolas Catinat, 37, was slain as he used his body to try to shield friends from the gunfire.

The family of Briton Nick Alexander, 36, who sold merchandise for the Eagles of Death Metal, paid tribute to him as “everyone's best friend — generous, funny and fiercely loyal”, in a statement.
Helen Wilson told Britain's Telegraph newspaper she was with him at the concert when he died: “…he couldn't breathe any more and I held him in my arms and told him I loved him.”

(The tweet above came after it was learned that the two people pictured, Marie and Mathias, were both killed.)

Also among the Bataclan dead was 26-year-old Valentin Ribet, an up-and-coming lawyer in Paris who graduated from the London School of Economics and Political Science.
A specialist in white collar crime, Ribet was remembered as “a talented lawyer, extremely well-liked, and a wonderful personality in the office,” said his firm, Hogan Lovells.
Others were gunned down as they chatted, laughed and celebrated birthdays on terraces and at bars and restaurant tables in eastern Paris. Others had the misfortune of simply passing through the area.
'Good humour incarnated'
Kheireddine Sahbi, 29, was heading home after a night out with friends when he was killed. Known as “Didine” to his loved ones, the Algerian violinist had been in Paris for a year to study music.
His new life in Paris came after surviving violence in his native land.
“He lived in a neighbourhood on the edge of Algiers, where the situation was very tense,” one of his cousins told AFP. He had “survived ten years of terrorism.”
When the shooters opened fire at the Petit Cambodge restaurant in the 10th district they killed California State University student Nohemi Gonzalez, 23.
Her mother Beatrice Gonzalez told US television Nohemi was “a very strong young woman”.
Boyfriend Tim Mraz posted a picture of them embracing on Instagram, saying he had lost “the most important person in my life”, calling her “a bright soul and the sweetest girl”.

We have learned of some very sad news from our LSE alumni community, following the #ParisAttacks. pic.twitter.com/NZVsG6PDLh

Veronique Geoffroy de Bourgies, 54, was sitting with friends on the terrace at La Belle Equipe on Rue Charonne when she was slain.
The former Figaro Madame journalist — and mother to two children adopted from Madagascar — had given up her career in news to focus on a humanitarian association she founded in 2004.
“Bright, warm. A beautiful soul,” wrote Figaro Madame. “Veronique was thirsty for life. Good humour incarnated.”

Among the messages of solidarity for Paris, there's been one message of defiance that has stood out. Antoine Leiris lost his wife in the Bataclan club. On Monday, he posted a message on Facebook. This is what he said. http://bit.ly/1N7tNSI

'Amputated part of me'
Aurelie de Peretti had come to Paris for a few days' holiday with a friend — a reward to herself after a tough season working restaurants in the south of France.
But the 33-year-old's treat came to a bloody, tragic end in the slaughter at the Bataclan concert hall.
Her father Jean-Marie de Peretti, a journalist with the Nice Matin group ofnewspapers, spoke of his sadness at the “tragic, unjust” loss of his “shining girl”.
She was “spending a few days in Paris on holiday after a difficult season working in restaurants on the beaches this summer. It was her little reward,” he told AFP.
“She'd been talking to us about this concert and this trip for months and months. Now we will never see her again,” he said.
He said Aurelie, a graphic designer, was a big music-lover who played guitar and piano.
Her sister Delphyne told Le Parisien newspaper she felt as if “someone has just amputated part of me”.
The killings will also impact a new generation, one not even born yet.
Matthieu Giroud, 39, had gone with friends to the Bataclan for a night out and was killed in the attack. The university teacher's wife is pregnant with their second child.
News website Mashable created a Twitter account to share mini obituaries for each of the 129 victims. Here are a few, and click here to follow the account as it continues to share the victims' stories.