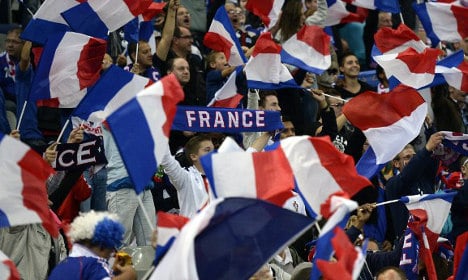 A communal rendition of the French national anthem will provide the emotional centre-point as France play England at Wembley on Tuesday four days on from the devastating Paris attacks.

The stadium's bars will shut five minutes before kick-off to encourage fans to observe tributes that will include a minute's silence, the laying of flowers by team captains Wayne Rooney and Hugo Lloris and the singing of 'La Marseillaise', which England's fans have been urged to join in with.

Breaking with convention, the French anthem will be played second, with the hymn's lyrics shown on the stadium's big screens, in order to create a stand-alone moment of solidarity during which the 129 people who died in the carnage that struck the French capital last Friday will be remembered.

“We will sing that together and share in that moment,” said France goalkeeper Lloris, who plays for London club Tottenham Hotspur.

“It will be sung by a great number of English people as well, which will make it stronger.

The words of the famous anthem have been published in national newspapers and shared widely on social media.

La Marseillaise on the back of the English sports pages before the England v France game https://t.co/aiOlKCqLXI pic.twitter.com/e9T7GzkTrD

Naturally many asking whether the England fans, not known for their linguistic abilities, will be able to quite demonstrate the show of unity that is asked of them.

Looking forward to thousands of Englishmen singing La Marseillaise IN FRENCH this evening. Linguists will study it in wonder for years.

Others were kinder, including this British journalist who shared a phonetic version to help English speakers (see tweet, perhaps while listening to YouTube version of the song below).

I made a phonetic first verse & chorus of the Marseillaise for singers at #EngvFra pic.twitter.com/EcL2dAzI0F

(The video below shows the words of the Marseillaise)

While British authorities have received no specific intelligence about any planned attacks, armed police will be deployed around the stadium to reassure an expected crowd of around 80,000 that will include Prince William as well as 1,400 travelling supporters.

Fans have been urged to arrive early as security checks are expected to take longer than usual, with the bags of every single person in attendance due to be searched.

Paris's Stade de France was targeted by suicide bombers during Friday's attacks, leaving four people dead including three attackers, but the Football Association said that tickets for Tuesday's game had sold at a healthy rate in the days since.

Only around 100 tickets have been returned.

The FA has confirmed that the giant arch over Wembley will continue to be lit in the red, white and blue of the French Tricolor, while France's motto — 'Liberte, Egalite, Fraternite' — will be shown on screens outside the ground.

The match itself promises to be a curious spectacle, with players on both sides having admitted that it will be difficult, if not impossible, to focus on football so soon after Friday's horrors, which also left over 350 people injured.