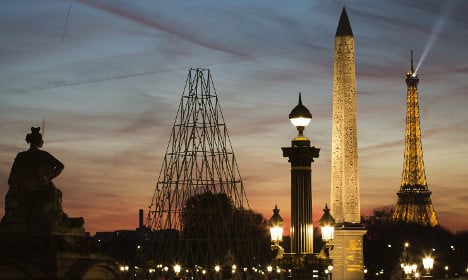 News that 129 young people had been gunned down in cold blood in cafes, bars and concert halls around Paris sent shock waves around the world.

Then came the disturbing sounds, videos and images of the carnage which were broadcast in every country.

While the six locations of the Paris attacks are probably unfamiliar to most tourists, they occurred in a city that is the most visited in the world – one which attracts almost 29 million visitors each year.

It's a city that was still recovering from January's terror attacks.

Naturally tourism chiefs fear that one of the knock-on effects of the massacre would see visitors turning their backs on Paris, deciding it is just too dangerous to come.

A group of visitors from New York about to leave Paris for Amsterdam on Tuesday told The Local that they wouldn't be returning any time soon.

“Even if it's illogical, I wouldn't return for a while, 100 percent. I've already told others that they shouldn't come,” said 26-year-old Zach.

Governments have been updating their travel advice too.

Britain’s Foreign office immediately updated its website after the attacks, warning its citizens visiting Paris “to be vigilant in public places and follow the advice of the local authorities”.

“It’s normal people are scared. The images went around the world,” François Navarro, head of the Paris regional tourism board told The Local on Tuesday. Navarro said they have already noticed a certain number of people deciding to cut short their trips, while others have cancelled their visits to the City of Light altogether.

“It is still too early to tell the impact on visitor numbers,” he said.

But days after the attacks, hotels and restaurants have reported a slump in bookings with Didier Le Calvez from hoteliers union UMIH revealing there had been a “sizeable wave of cancellations”.

A hotel near the Gare du Nord station has seen “a definite decline” in occupancy, with a staff member telling The Local that cancellations have been flowing in for four days now.

“People are frightened and don't want to come to Paris right now. We understand that.”

On Tuesday budget airline Easyjet also reported that there had been a drop in demand for flights to France.

But just as Parisians are being urged to continue life as normal, so too are the tourists.

“We need to get the message out that the places frequented by tourists in Paris, whether it’s the museums, the monuments or the shops, are safe,” Navarro said.

“The reason Paris is the number one destination in the world is because people love the life in Paris, the neighbourhoods, the cafés, and that life will go on. “They launched an attack on the daily life of those who live here, but we won’t change that,” Navarro said.

“Everything is open as usual and we are ready, as always to welcome tourists.”

Navarro says tourism chiefs are asking for organizers of cultural events like concerts to continue as normal and he says it’s vital that events like Cop21 go ahead to restore confidence in the city.

While many concerts have been cancelled, British band Simply Red will take to the stage at the Zenith venue on Tuesday in the first big gig since the attacks.

“We cannot cede to panic and fear. Paris was hit but people know that this could happen anywhere in the world,” Navarro said.

And thankfully, while it’s clear many of those who are scared have stayed away, people are still arriving in Paris, intent on enjoy everything the City of Light has to offer.

At Gare du Nord on Tuesday tourists admitted to feeling afraid of repeat attacks, but the majority who spoke to The Local brushed off the idea of terrorism as a travel deterrent.

Some, like Andrew from the US, who arrived on Sunday, wanted to show solidarity with the French.

“We know how supportive France was to us after 9/11, and we wanted to show the same support.

“It was our first time in Paris and we felt safe.”

Denis from Albania who had just arrived said: “Why would I be scared?”

“It's terrible that innocent people died, but why would you let something like that stop you travelling to Paris?”

Since the attacks the Paris Tourisme Facebook page has been inundated with messages of support from all over the world, leaving the tourism chiefs touched by the outpouring of solidarity.

“We can’t respond to all the messages but we want to say thanks,” Navarro said.