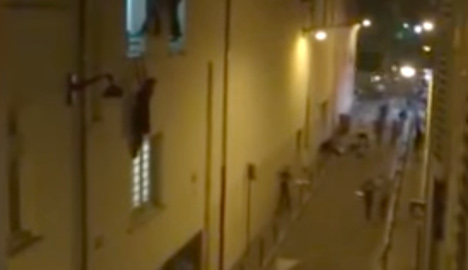 The woman was seen hanging from the window ledge. Photo: Le Monde
It was one of the more striking and shocking images to emerge from the barbaric attacks in Paris on Friday.
While dozens fled the Bataclan concert hall on Friday night, one pregnant woman held on to a window ledge, dangling against the wall.
“Help, help, I’m pregnant, catch me if I fall,” the woman cried.
Beneath her, dozens ran for their life, some dragging the bodies of their friends or family members who were shot.
Inside the hall, terrorists were methodically killing 89 young music fans before eventually blowing themselves up.
A journalist for French newspaper Le Monde was filming the drama from his nearby apartment, his images of the woman being broadcast to a horrified public soon after.
Here is his film. Viewer discretion is strongly advised.
Towards the end of the two-minute video, a man can be seen pulling the woman upwards, although the rest of the story remained untold until Monday. Indeed, viewers had no way of knowing if the two had even survived.
But thanks to a call-out on Twitter from the woman's friend, embedded below, the two were able to get in contact with each other.

The original tweeter wrote: “We have found the man who saved my friend (…) The rest of the story is theirs.”
While the woman has decided to remain anonymous, her hero, known only as Sébastian, told La Provence newspaper exactly what happened.
“In front of me there were two windows. A woman was hanging from one them, she was pregnant and was pleading with the people below her to catch her if she jumped. Below it was chaos. I went through the other window and attached myself to a ventilation shaft,” he told the paper.
“I was 15 meters off the ground. I held on for five minutes then the woman, who couldn’t hold on any longer, asked me to help her get back inside. So that’s what I did. I don’t know where she went following that.”
He then was captured by one of the terrorists and faced a harrowing ordeal, forced to listen to the threats of the gunmen and watch his fellow concert goers being shot.
When police raided the building, he managed to escape.
“I was trampled but it was the happiest pain of my life. I was protected. I was alive,” he told the paper.
Url copied to clipboard!