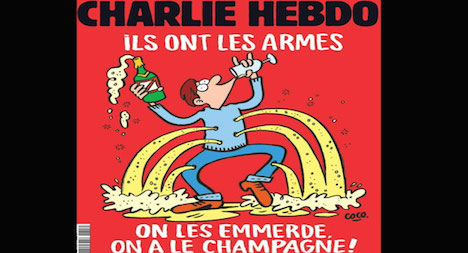 The much awaited cover for the edition to appear Wednesday, by cartoonist Coco, depicts a dancing reveller, bottle and glass in hand, with champagne pouring out of holes in his body.

“They have weapons,” the caption reads, adding underneath: “Screw them, we have champagne.”

The attacks on Friday evening struck several targets in a trendy area of eastern Paris including pavement cafes and the Bataclan rock concert hall, where mostly young people were enjoying a night out, leaving 129 dead overall.

They came ten months after the attack on Charlie Hebdo's offices – just a short walk from the Bataclan – decimated their editorial team, killing some of France's most beloved cartoonists in a rampage that left 17 dead there and elsewhere in the city.

The following edition showed the Prophet Mohammed with a tear on his cheek saying “Je suis Charlie” (“I am Charlie”) – the global cry of solidarity after the January 7th attacks – accompanied by an ambiguous legend reading “All is forgiven.”

The paper's managing editor, Riss, writes in Wednesday's editorial: “Blood and tears, prophesied Churchill. That's where we are. Without realising it, the Parisians of 2015 have sort of become the Londoners of 1940, determined not to yield, neither to fear nor to resignation, whatever catches them off guard.”

He calls for renewed debate on Islam, which, he writes, “for the past 20 years has become a battleground where radicals want to exterminate non-believers and subdue moderates by force.”

Riss adds: “Avoiding the pitfall of division should not make us renounce the right to criticise religion on the pretext that its exercise is sometimes irritating. Among all the basic freedoms that make up our lives, it is also this freedom that the killers wanted to eliminate this Friday evening.”