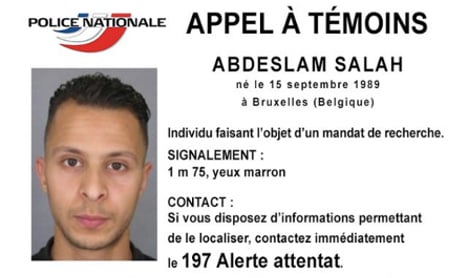 Salah Abdeslam, the attacker thought to be on the run. Photo: Police Nationale/Twitter

Abdeslam, a 31-year-old Frenchman living in Belgium, blew himself up outside a bar on Boulevard Voltaire. He was identified by prosecutors as the man who rented a Seat car used in the attacks. He detonated his explosive vest at the Comptoir Voltaire cafe, seriously injuring a bystander and killing himself.

Flemish-language newspaper De Standaard reported that Abdeslam was known to police and had links to extremist leader Abdelhamid Abaaoud.

AFP reported that both Abdeslam and Abaaoud, who has fought with ISIS in Syria and has claimed in English-language magazine Dabiq to have rejoined the group, lived in the Molenbeek district of Brussels, which has a reputation “as a hotbed of Islamic militancy”.

Mostefai was one of the Bataclan attackers, who died by detonating a suicide belt. He was identified by fingerprints from his severed finger. Members of Mostefai's family including his brother (who says the two had not spoken in six years), his father and sister-in-law are being questioned by police.

The 29-year-old has Algerian heritage and grew up south of Paris in Courcouronnes. He was known to police for eight convictions for petty offences in the period 2004-2010 and was the subject of a police 'S' file for radicalization around 2010 for visiting a mosque with radical links in Lucé, but police lost track of him and it is believed he spent some time in Syria.

However, reports say that Turkey warned France almost a year ago of his suspected links to ISIS. Turkish police “notified their French counterparts twice – in December 2014 and June 2015” about Mostefai, a senior Turkish offical told AFP Monday.  “We did, however, not hear back from France on the matter,” added the official.

The Turkish official confirmed that Mostefai entered Turkey from the northwestern province of Edirne that borders EU members Greece and Bulgaria in 2013.

“There is no record of him leaving the country,” said the Turkish official. The official said that French authorities had only showed interest in

BFMTV reported that a fourth attacker had been identified as 28-year-old Amimour, citing police sources. His family reportedly live in the northern Paris suburb of Bobigny, the site of police raids this morning, whilst Amimour himself is from the Drancy suburb outside Paris.

He was known to police for “being charged on October 19th, 2012 for conspiracy to commit terrorism” over a planned attack in Yemen, and after he violated his judicial supervision in 2013, judges issued an international arrest warrant.

In an interview before Friday's attacks, his family told AFP that he had gone to Syria in 2013. Three members of his family were reportedly taken into police custody Monday morning.

One of the suicide attackers at the Stade de France has been identified by the Washington Post as Bilal Hadfi, born in 1995, who lived in Belgium. He is thought to have fought for ISIS in Syria.

French authorities have now confirmed the link between Al Mohammad, one of the Stade de France bombers, and the Syrian passport found by his body. The passport was discovered on Sunday, but authorities were initially unable to confirm the identity of the man.

According to the passport, he was born on September 10th, 1990 in Idlib, Syria. The passport was registered by a refugee who landed on the Greek island of Leros on October 7th. Serbian newspaper Blic reported that French security officials had asked Serbian authorities for help as Al Mohammad had been registered in the southern Serbian town of Presevo.

The prosecutor's office said in a statement that the passport “remains to be verified”, but that fingerprints of the body match those taken in Greece in October.

The brother of Brahim Abdeslam, Salah has also been linked to the attacks by police and is thought to have rented the black Volkswagen Polo used by the group. He is currently on the run and an international manhunt has been launched, with the public warned not to approach the killer.

French police stopped Abdeslam and two other men near France’s Belgian border shortly before the attacks, according to reports, however the men were not taken into custody because their names were not on any wanted list. A third Abdeslam brother is thought to have been among seven people arrested Saturday in Molenbeek, Brussels, in connection with the attacks.