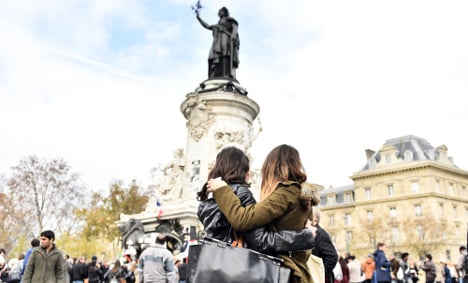 Photo: AFP
Despite the brave faces, people in Paris are still on edge after terrorists carried out the worst ever peacetime attack on France.
This tension was highlighted dramatically on Sunday night when a false alarm sent hundreds running in blind panic through the streets.
The mood was solemn on Monday, as the country observed a minute's silence that turned into ten, at least out the front of Le Carillon and Le Petit Cambodge where 14 people were killed.
Many in the crowd were in tears.

Hundreds gather at the scene of the shootings in Paris for a minute's silence. pic.twitter.com/M80ERP2NYC

The shock of Friday's bloodshed is still evident on people's faces and can be heard in their conversations.
While the immediate response by the public and the government has been to pay respects, lay flowers, light candles and pray, questions are now being asked about how France and its people should react to the killing of 129 people in its capital city.

Very sombre mood as the streets are packed at the sites of the Paris shooting. pic.twitter.com/c1kT7dkwzf

A woman named Sylvia, who lives near Le Carillon, said the attacks were a signal for France to take action.
“It may sound strong but France needs to wake up. This should ring serious alarm bells. I'm not saying we need to go into Syria or anything, I'm saying we need to face the reality that France has changed. We are not the same romantic and historic country we have always been.”
Hours later Francois Hollande announced France would be stepping up action in Syria and seeking the support of Russia and the US to crush the terrorists.
On the now iconic Place de la République, hundreds were ignoring the police ban on public gatherings and were paying respects below the Marianne statue.
Yazid, a 26-year-old Parisian (pictured below), said it was too soon to comment on Sunday's military action, which saw French fighter bombers pounded Raqqa, the de facto Syrian capital of Isis,
“Military action now is very tough to analyze. I think the first reaction of the government needs to be to focus on the public. For us Parisians, even though we can't gather by law, we must focus even more on positive images to make sure people are united,” he said. He added that the march after the Charlie Hebdo massacre was “impressive”, but impossible to emulate for now.
“All we can do is take part in small gatherings like this one,” he said.
“Most importantly, we are not scared. People all over the world have lived through violent times. And I think France is coping well with its own terror problems.”
He added that brotherhood – or fraternité in French – was literally part of France's motto, and dismissed any notion of French people turning on Muslims in the country just because the attackers were extreme Islamists.
“Friday's atrocity was so absurdly violent that I don't think the French would think any French Muslims could stand on the side of the terrorists”.
“With the Charlie Hebdo attacks, there was more uncertainty about blame. It's much harder to pin Friday's attacks on Muslims than it perhaps was in January.”
Not all agree, however, including a Lebanese man called Amein Elie, who has called Paris home for five years.
He says he is not only scared of more potential terror attacks, but also of a growing racism in France. “I would be lying if I said I'm not scared. I mean, these attackers are sick. They're psychopaths. And you can see the fear and tension in people's faces in Paris,” he told The Local.
“But I am also scared of the growing racism. I'm sorry to say it, but if you don't have light hair and blue eyes then you're going to be a victim of racism. It's 2015 – it's terrible that it's still like this.”
He added that another of his fears was that the far right would gain more popularity after the attacks.
He did, however, support Sunday's bombing of Isis strongholds in Syria.
“I agree with it, I think it was a good move. My French colleague disagrees though, he told me it will only aggravate the situation.
“But I think that if France didn't bomb Isis then they would only get bigger.
“France cannot act alone in this though, we need the cooperation of the other big countries – Russia, the US, the UK, Australia. We need to find a solution together.”
Others said that while military intervention was a good start, it was an impossible job. One of these were Nicole, a woman in her fifties visiting Paris from her home in Nantes, western France.
“The increased military and police presence is a good beginning. But even so, it's impossible to monitor so many at-risk people,” she said.
“These are people who feel they are heroes and are ready to die for it. They can attack anywhere at any time.
“We are in the midst of a new type of war, one we have never seen before.
“We have to keep living as normal. We have no choice. Me, personally, I don't want to live under the threat of terror.”
On Monday Hollande announced that 8,500 jobs would be created: 5,000 more police and gendarmes, 2,500 in the justice department and 1,000 more in customs and border control.
Nicole said her other big concern was that the far right National Front and their leader Marine Le Pen could take advantage of people's fear.
“She uses the fear to attract voters. She is always talking about the security of France and she will no doubt do it again. If she uses this successfully in the upcoming regional elections then it will be a catastrophe – not to mention in the national elections next year.”
“Marine Le Pen cultivates racism, and it's very dangerous for the future of France.”
On Monday Le Pen called for an immediate end to migrants being accepted in France.
It's early days but it appears the French are ready to support more military action abroad, but they fear more division in an already fragile society back home.
Url copied to clipboard!