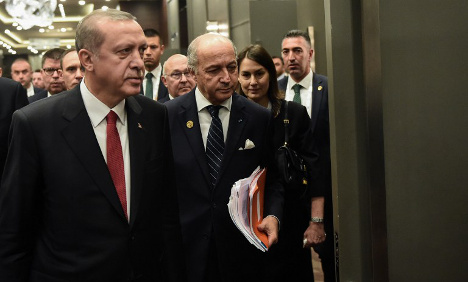 Turkish police “notified their French counterparts twice – in December 2014 and June 2015” about Omar Ismail Mostefai, the official told AFP, asking not to be named.

“We did, however, not hear back from France on the matter,” the official added.

Identified by his finger, which was found among the rubble of the Bataclan concert hall, the 29-year-old Mostefai was one of three attackers, all wearing suicide vests, at the venue where 89 people were killed in the bloodiest scene of the carnage.

Born on November 21st 1985, in the poor Paris suburb of Courcouronnes, Mostefai's criminal record shows eight convictions for petty crimes between 2004 and 2010, but no jail time.

The Turkish official confirmed that Mostefai entered Turkey from the northwestern province of Edirne that borders EU members Greece and Bulgaria in 2013.

“There is no record of him leaving the country,” said the Turkish official.

The official said that French authorities had only showed interest in Mostefai after the attacks.

“It was only after the Paris attacks that the Turkish authorities received an information request about Omar Ismail Mostefai from France.”

The official said that on October 10, 2014, Turkey received an information request regarding four terror suspects from the French authorities, but not for Mostefai even though he had been identified by Turkey as a potential terror suspect.

“We don't know the whereabouts of the four suspects we had spotted linked with Mostefai,” the official told AFP. “This is a source of concern.”

Friday's attacks which claimed 129 lives were the worst in Paris's history. Paris prosecutor Francois Molins said Mostefai had been singled out as a high-priority target for radicalisation in 2010 but, before Friday, he had “never been implicated in a terrorist network or plot”.

Investigators are now probing whether he took a trip to Syria last year, according to police sources.

'No time for blame game'

Ankara came under the spotlight when Hayat Boumeddiene, the partner of one of the assailants involved in attacks this January in Paris, crossed through Turkey into Syria – without being stopped.

Her flight raised concern that Turkey's 911-kilometre (566 mile) border with Syria had become a major thoroughfare for jihadists and their sympathizers seeking to enter the war-ravaged country from Europe.

The Turkish official said on Monday: “This is not a time to play the blame game.”

But the source added: “The case of Omar Ismail Mostefai clearly establishes that intelligence sharing and effective communication are crucial to counter-terrorism efforts. The Turkish government expects closer cooperation from its allies in the future.”

“They don't want to be blamed for any failure… the most important now is that we really share our intelligence in a very good way, which was not always the case yet.”