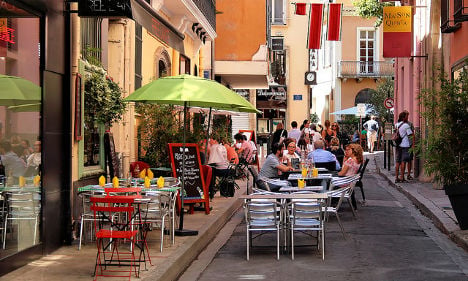 Despite the panic in Paris after Friday's attacks, the city's residents are determined not to let the terrorists change their way of life.

Restaurant guide Fooding has called on Parisians to go back to the city’s cafes and restaurants on Tuesday evening, using the slogan #tousaubistrot on social networks.

They have adapted the drawing ‘Peace for Paris’ – the Eiffel Tour in a black circle designed by Jean Jullien which has spread throughout social media – by turning it into a plate with a knife and fork either side.

The initiative aims to “pay homage to the victims of the attacks, support the professionals in the restaurant and entertainment industries, targeted in the attacks”, the founder of Fooding, Alexandre Cammas, explained. Cammas added: “Our goal is that on Tuesday evening people return to their local bistrot. We need to switch the lights back on.”

Didier Chenet, of the restaurant trade association SYNHORCAT, said Monday that more than half of the city's eating places had joined the call. “It is important to say that we are going to keep on living” as before, he said.

Their slogan echoes the hashtag #JeSuisEnTerrasse which had already begun circulating on Monday morning as Parisians proudly continued the French tradition of visiting the terraces of bars and restaurants.

The mayor of France has announced that Paris’ Christmas market and ferris wheel will reopen on Wednesday, with additional security.

Local gyms, museums, schools were welcoming the publlic once again, albeit with extra security measures in place; at certain schools close to the scenes of the attacks in the tenth and eleventh arrondissements, security personnel were present and parents were not allowed to enter the school without ID and a good reason. Culture minister Fleur Pellerin said musicians would “never stop putting on concerts” and claimed that in the face of “barbarism… culture is our biggest shield and our artists our best weapon”.

The Philharmonie de Paris reopened Monday evening with two concerts, one of which is to take place in the great hall with 2,400 spectators. The Philharmonic’s exhibitions and activities also reopened to the public on Tuesday.

The Philharmonie is benefitting from reinforced security; fewer entry points, more people and equipment and entry areas, including metal detectors.

Bayle admitted that it may take a while for people to start visiting cultural institutions like the Philharmonie in their usual numbers, but he is confident that “after the trauma and the period of reflection, the public will want to defend their way of life and go out to see shows”.

Meanwhile others took to Twitter to remember their best memories of concerts and events at the Bataclan concert hall, scene of the most deadly of Friday's attacks, using the hashtag #MonPlusBeauSouvenirDuBataclan.