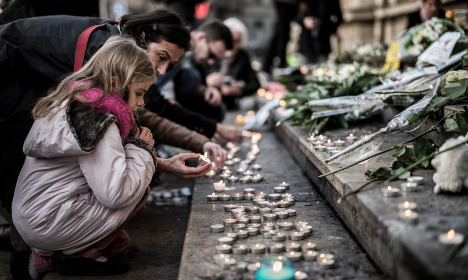 A woman and child at a makeshift shrine in Paris. Photo: AFP
Most child psychology experts believe that children should be told, but warn that parents have to be careful not to allow them to be overwhelmed by fear or horror at what happened.
Above all, they must not let their own emotions or anguish intrude.
Bernard Golse, head of paediatric psychology at France's leading children's hospital, Necker, said the subject can even be broached with very young children “from the age of three”.
“They feel the anguish and anxiety of adults. Not saying anything is even more worrying for them because they imagine it is worse than it is,” he said.
“There isn't a wrong way of talking about it. But not talking about it is always bad.”
Psychologist Jeanne Siaud-Facchin argued that before the age of six it is better “to spare” children because until then they do not have the “capacity to understand”.
“There are no rules,” she said, “but I think it is essential to leave them in their child's world and not to expose them to (these kind of) images or words because they will only take emotions without understanding their meaning. The only thing that they will understand is raw and worrying fear,” she said.
But if they ask questions, parents should not lie, Siaud-Facchin added.
“Better to keep it a bit hazy. Say that 'fighters have attacked the country' or that you are worried because serious things have happened in the world of adults that does not concern them,” she added.
“Some parents say to themselves wrongly that they have to be absolutely truthful to their children. But children are used to us not talking to them about certain things.”
With children aged six and upwards it is vital to talk about the subject, Siaud-Facchin said — particularly if it is likely to come up at school, either brought up by teachers or in the playground.
'I'm there to protect you'
But how do we explain such terrible things to them? Above all, avoid using words like “carnage”, “massacre” ou “bloodbath”. “These words create more fear than images do. They carry an emotional violence,” said Caroline Gaertner, a journalist at a leading French children's weekly newspaper.
She questions whether we should even use words like “war” and “terrorism”, arguing that “for a child, war means that there is fighting everywhere”.
But according to Siaud-Facchin,  “war” is the word that means most to children.
“They have heard it spoken about when they were younger, then in their history classes. You could tell them that terrorism is a new type of war, that warriors want to fight us, but without going into details,” she said.
In a society saturated with information it is hard to hide the front pages, but “if they hear or see things that can terrify them, parents are there to act as decoders,” the psychologist said.
“If children are scared, tell them it's okay, that you are too. But reassure them by saying they're not in danger, that protective measures are taken in France and that you're there to protect them,” she said.
Golse of the Necker children's hospital said “sharing an emotion is good for everyone.”
But it is important not to project your own anxieties about the future on children who live in the present.
“As parents, you must always think about keeping some perspective,” Siaud-Facchin said.
Url copied to clipboard!