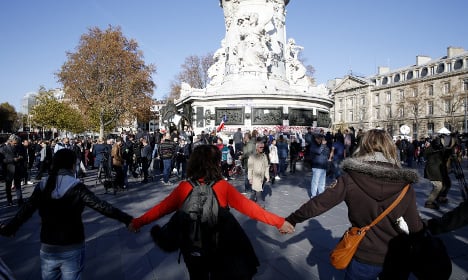 People join hands as they stand around the Monument a la Republique in Paris. Photo: Patrick Kovarik/AFP

Friday's violence, targeting football supporters, concert-goers, and those at restaurants and cafés was totally indiscriminate, seeing people from all walks of life killed in an instant, simply for being in the wrong place at the wrong time.

The 129 victims were of at least 12 different nationalities, and many were young professionals. On Saturday, The Local France's Editor wrote of how the atmosphere had changed in the City of Light as many said the city no longer felt safe.

We asked our readers how they felt as foreigners living in France in the wake of Friday night’s atrocities. The responses were varied; some were scared, some pointed out that other countries are equally at risk from terrorist attacks, but the overall message was one of defiance and solidarity with the French people.

“Paris is the city that I chose. It is not a city where I “ended up”. I'm – still – in love with Paris. Leaving Paris for this is ridiculous. Do you leave your spouse because he got mugged?” – Nancy Li, originally from Hong Kong

“Stopping our daily – unoppressed, happy – life, stopping the enjoyment and joie de vivre of this beautiful city is just what these extremists want to achieve. I certainly am not going to give them the satisfaction. As for the risks, sadly this is now a fact of life, and could happen anywhere in the world at any time.” – Ulrike Lemmin-Woolfrey, originally from Germany “Proud [to live in Paris] and maybe a little fearful, but more angry and defiant. It makes me want to go out to concerts and cafés and restaurants and have fun with my friends more than ever. Definitely not leaving Paris.” – Katie Warren

“I chose France. I now consider it “home”. For me, the thought of leaving never even occurred to me. This type of thing can occur no matter where you live. Definitely not leaving!” – Amy Sedlacek

“The thought of 10,000 troops being deployed (I do understand why) throughout France and the changes made yesterday by Holland to the 1958 law of 'being at war' unnerves me somewhat. Smacks of martial law. Apart from that, I'm cool.” – Janet Cook

“We bought a business here and moved here lock, stock & barrel (wine barrel) 2 years ago, we moved from England which is rapidly becoming an occupied country to a country that was once occupied and is now free, we would never go back to living in England, our life is in France, God bless the souls of Friday 13th 2015 in Paris. VIVE LA FRANCE,” – Christopher Halliwell.

I will never leave France and despite the annonymous hate mail put in my letterbox over the weekend because of the work I am doing with Socks For Refugees – I will not stop what I am doing and I'm proud to have my sons helping too,”  – Helen Rainsford

“Why would any of us give in to terrorists? It would be abandoning our French friends, and the country that has welcomed us, to its fate. We will not be safer anywhere else anyway. It's a global problem.” – Steve Mann

“For Brits, terrorist attacks are not novel.  40+ years of the IRA saw to that. Keep Calm and Carry On.” – Ross Goff

“We have lived here for four months, moving from the UK. We love France, its people, way of life, two-hour lunches – we love it! Our hearts are broken for those so badly affected by this event, but our resolve is strong to keep democracy alive and our freedoms intact. Never give in, never give up” – Debbie Tyrrell, originally from the UK

“I'm staying! Shaken by the brutal murders in Paris, but more than 100 Americans die everyday….victims of gun violence! Let me be honest: Despite the attacks I feel safer here than in the US.” – Ricki Stevenson, originally from California

“Never even crossed my mind to leave – my whole life is here. They are not going to win.” – Chris Balchin

You can join the debate on our Facebook page here:

Proud to be in France?Fearful for the future and thinking about heading home?How do foreigners living in France feel after the devastating attacks in Paris, please share your thoughts

Posted by The Local France on Monday, 16 November 2015