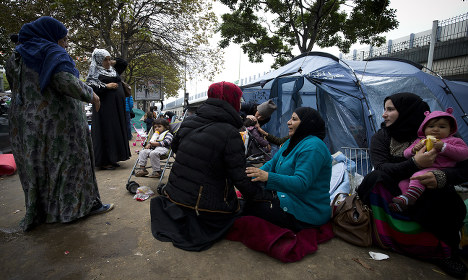 Syrian refugee women talk while looking after their children, sitting by a tent of a makeshift camp at Porte de Saint-Ouen, in northern Paris. Photo: Joel Saget/AFP

Carefully shielding a lit candle against the cold pouring rain, Syrian refugee Ghaled, 22, had come to the French embassy in Berlin to pay tribute to victims of the Paris attacks.

“We are with them right now, just to help them with this crisis. What's happening to them is happening every day in Syria, 100 times per day for five years, so we know what that means,” he told Agence France-Presse.

Ghaled was a student in dentistry in Damascus, but decided to leave the Syrian capital after seeing no end to the violence engulfing his homeland.

Like tens of thousands of his fellow countrymen, he first risked his life crossing the Mediterranean in an inflatable boat, before trekking for 17 days to get to Germany five months ago.

But just as he began looking forward to rebuilding his life with German language classes which he hopes would help him return to dentistry school one day, Friday's attacks that killed 129 people in Paris have raised fears of a backlash in Europe.

French police's discovery of a Syrian passport near the body of one attacker in particular has sparked concerns that some of the assailants might have entered Europe as part of the huge influx of people fleeing Syria's civil war.

“It's a problem,” said Ghaled, who urged against victimising his countrymen, saying the attackers “are not Syrians” and that the passport link was simply make-believe.

“I think it's a big lie because all the area is destroyed, and just the passport is still ok? That's silly, really silly,” he said, suggesting that the passport was either fake or had been planted “because they hate refugees… so many people hate Syrians”.

“Syrians are not terrorists”

Another Syrian refugee, William, 24, who had also arrived in Germany five months ago, was equally anxious.

“Many news speak about Syrians, police find Syrian passport. Of course I'm worried. It's not good,” said the 24-year-old tourism student from the northern town of Hama.

“Syrians are not terrorists. we need life and peace for work,” he said, adding that he wanted to return home once the war is over.

Mouhanad Dawood, who had reached the EU through Italy before eventually seeking asylum in Germany 11 months ago, said his host country has been “very welcoming”.

“People here understand not everyone are terrorists, a lot of people are running from terrorists, especially from IS,” said the trained architect.

But he conceded that he was “a little bit” afraid that attitudes could change. “I have my family here now, I want to start my life here.”

To those who have doubts about Syrians after the French attacks, Dawood said: “A terrorist is a terrorist. It doesn't matter where they come from.”

In Germany, where a debate had already been raging before Paris attacks over the influx of asylum seekers expected to top a million this year, Interior Minister Thomas de Maiziere came out quickly to counter any attempt at drawing a link between terrorists and migrants.

“I would like to make this urgent plea to avoid drawing such swift links to the situation surrounding refugees,” de Maiziere said on Saturday following a crisis cabinet meeting.

He said authorities would watch far-right extremists closely, noting there have already been in recent months “appalling scales of attacks against asylum seekers and asylum seeker shelters”.

On Sunday, the interior minister confirmed that security would be stepped up at asylum seeker shelters.

The anxiety was also palpable on social media among asylum seekers in Europe.

“Will yesterday night's attacks in Paris affect our lives as refugees?” asked one user on “Bus Stop for the Lost Ones”, a Facebook page that is extremely popular among Arabic-speaking migrants taking the Balkan route to Europe. “Of course,” replies another member.

“Curse the guy who blew himself up… Did he have to take his passport with him? He should have put it away somewhere and gone to hell,” wrote Jalal Abazid on Facebook, a Syrian refugee in Germany.

In France, Ayham al-Khalaf, a Syrian journalist who fled from his home city Raqa soon after it fell under IS control, told Agence France-Presse: “If some French people already mistrusted Arabs, now that hate will increase.”

“The situation will get harder for us here for sure.”

But others who were still on the road and battling to enter the European Union are undeterred, saying any animosity that they might face from the Europeans could not be worse than the bomb shells that are falling daily at home.

Cradling a sick child in her arms as she queued up to be registered at Macedonia's border with Greece, Kalaham, a 32-year old who fled from the Syrian capital with her husband and child said: “I just wanted to leave Syria. I hope for better.”

“I have no fear. It's chaos in Syria so it couldn't be worse.”

Likewise, Malek Rozhdan, who is travelling with his wife Jusak and three children, said: “It's very very bad these days in Damascus, where we are coming from. Bombs are just falling like rain.”

“Of course it's not good at all what had happened, but Europe is good for living… This I think is not going to influence our trip in any way.”