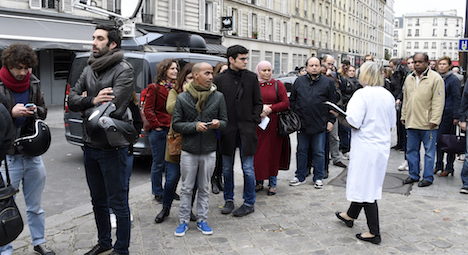 Blood donors line up outside the Hôpital Saint Louis in Paris on Saturday. Photo: Dominique Faget/AFP

“It felt like scenes from a war,” said Philippe Juvin, head of emergency services at the Georges Pompidou hospital in Paris, describing the arrival of gunshot victims from the attacks which killed at least 129 people and injured over 350.

Those with serious injuries, about a third of those hurt, were immediately rushed to operating theatres or into intensive care, said Juvin, who has combat zone experience, including in Afghanistan.

“Most of the injured people had through-and-through bullet wounds, it was a horrible sight,” said a surgeon at the Lariboisiere hospital who asked not to be named.

“There was a feeling of great desolation,” the surgeon said.

Doctors said they were struck by patients' deep state of shock “as if they had been drugged”.

One 30-year old patient, who took a bullet in the liver, only asked “Is it serious?”, one doctor recalled.

“It's as if they were petrified. They're not expressing any normal emotions,” said Dominique Pateron, head of emergency services at the Saint-Antoine hospital in Paris.

One patient, with a serious bullet wound to the arm, seemed detached from both the events and his own injuries.

“All he said was 'I don't know. I didn't see anything',” Pateron said.

A major challenge for doctors is to divide patients up between the French capital's hospitals “to give them the greatest survival chance”, said Didier Journois, head of Georges Pompidou's intensive anaesthetist unit.

Most of the attack victims will suffer after-effects, some for a long time to come, and many will have to undergo multiple surgeries, doctors predicted.

They cited the case of Philippe Lancon, a survivor of the Charlie Hebdo attack, who has had 13 operations for his fractured jaw since the January shooting.