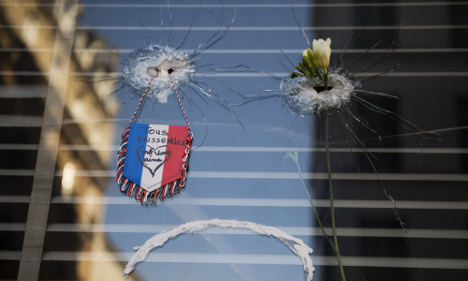 Bullet holes in a window in Paris on Sunday. Photo: Vilhelm Stokstadt/AFP

Investigators are probing possible links to the conflict in Syria in a joint inquiry with Belgium.

Seven of the gunmen and suicide bombers who took part in the carnage, which killed 129 and was claimed by Islamic State jihadists, died in the bloodshed.

But the discovery of a black Seat car containing several AK47 rifles, which was used by the attackers at several locations, has raised questions about others who may still be at large in a probe which is increasingly pointing to Belgium.

1. The teams were organised

Investigators are working on the theory that there were three teams.

The initial strike was by a team of suicide bombers outside the Stade de France where the first blew himself up at 9:20pm (2020 GMT) while the French and German national football teams were playing a friendly. The other two set off their explosive belts at 9:30pm and 9:53pm.

Despite US media reports, there is no proof any had a ticket to the game, investigation sources say. It remains unclear why the first attacker blew himself up outside the stadium in an area with no people.

The second team entered the Bataclan concert hall at around 9:40pm. Among them was 29-year-old Paris native Omar Ismail Mostefai. Three attackers were killed during a counter-assault by French security forces.

According to a source close to the inquiry, the third team carried out three shooting attacks on several bars and restaurants in central Paris at 9:25pm, 9:32pm and 9:36pm, firing hundreds of bullets. A suicide bomber also blew himself up in a bar at 9:40pm on Boulevard Voltaire.

The question now is: was this third team made up of suspects arrested on Saturday in Belgium? Until this is confirmed, the hypothesis that some attackers are still at large cannot be ruled out.

2. There may be a Syrian connection

Since 2012, jihadists heading to Syria have been the biggest concern for Europe's counter-terror services, with France and Belgium among the countries most concerned by the phenomenon.

Although the security forces had opened an “S file” on Mostefai — a category for suspects who are potentially radicalised — he passed under the radar, and in all probability spent some time in Syria in 2014. Did he return with instructions? In April 2014, another French jihadist called Ibrahim Boudina was arrested after returning from Syria on suspicion of planning an attack along the French Riviera.

What of the other alleged attackers? Are we dealing with a group of jihadist veterans who fought in Iraq or Syria? At the Bataclan, the attackers were overheard speaking about both places.

Investigators remain cautious over the Syrian passport found near the body of the first suicide bomber to blow himself up by the stadium. The name on it is unknown to French anti-terror authorities. And a source close to the inquiry said it remained unclear whether the holder of the passport was in fact one of the suicide bombers.

Greek police said they have been asked for information on two Syrians who registered as refugees in recent months, but the figure of two has not been confirmed, with French investigators seeking information on just one name, the source said.

3. A range of weapons were used

The attackers used automatic weapons and a number of Kalashnikovs were found on Saturday evening in an abandoned black Seat car in the eastern suburb of Montreuil. The car is believed to be the one in several of Friday's attacks. There must also have been an explosives specialist involved who put together the explosives belt and he is unlikely to have taken part in the operation since his skills are too precious, expert have told AFP.

The inquiry will also focus on the funding used by the assailants and its sponsors. In several recent attacks in France, such as the January attack on the Charlie Hebdo magazine, investigators have found links between the assailants and French-speakers in Syria.

Such questions are unlike to be answered by the interrogation of people close to Mostefai, who appears to have cut ties with at least part of his family.

International cooperation is the Achilles' heel of European counter-terror operations. IS has recognised this and called on its militants to hit neighbouring countries where they are less likely to be known and identified.

The inquiry into an abortive attack on a high-speed train between Amsterdam and Paris in August showed major weaknesses in the exchange of information between the respective intelligence services. The Paris attacks will shine a light on whether efforts to improve intelligence-sharing have born fruit.