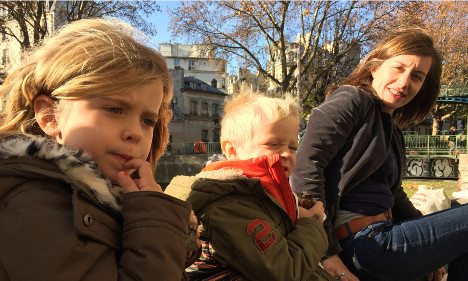 Cecile says 'it's even worse than after the Charlie Hebdo attacks'. Photo: Sam Davies
Parisians were out on force on Sunday as the sun shone in the capital – and although many put on a brave face, others spoke of their underlying fears.
“It’s even worse than after Charlie,” a woman called Cecile (pictured above) told The Local, referring to the attack on a satirical magazine in the French capital in January.
“There was a sense of hope then that things would improve, that we could find a solution. My kids are asking questions, because the father of my son’s friend is “missing” – he was at the Bataclan on Friday. The kids ask “where is Leon’s father? Why has he disappeared?”
Another parent, Lisa, said “We just finished explaining Charlie Hebdo to the kids and now have to do it all over again.”
And it wasn't just the children feeling lost.
A 29-year-old man called Tom, below, said he was feeling both confused and defiant.
“It’s not so much fear because how can you fear something you don’t know will happen or know what actually is. It’s helplessness. What are we supposed to do? It’s not like there are houses to rebuild,” he said. Others were defiant in the face of terrorism.
“You need absolutely to continue living,” said a man named Murati.
“Go out, go riding, eat at restaurants. That’s what they want to stop. And if we do, they win. Drink wine. It’s a modern war. It’s psychological. So you will always have victims. Every day we hear about attacks in Lebanon, Iraq. It happened in France today, but it’s an everyday reality in other countries.”
Others, like Elaham and Mehdi (pictured below), refused to let terrorism spoil their weekend.
“We feel fear, yes, but life continues. We got married today. We changed our plans a little – we were going to visit historic sites but instead decided to walk along the canal.” Not everyone was so forgiving. A man named Dani said he had lost his patience after learning that it was foreigners who had carried out the attacks.
“I feel we really are at war. I no longer feel tolerance. These people who kill youths for no reason,” he said.
“I think of the victims’ families, children. Everything has been ruined: people who come to France and yet they hate us, hate Parisians. They hate everything. I can no longer tolerate them. Why should racism only go one way? Now it will go both ways. We welcomed these people in.”
One man, 23-year-old Yoann (pictured below), said he refused to be afraid in the face of the attackers.
“The ambiance will be worse now. Already Parisians are not especially happy people. Everyone will come together for a week, but that’s all. It will just be like after Charlie,” he said. But perhaps the most resounding response felt across Paris – and indeed the world – was a kind of confused sadness as people try to understand how and why attackers could kill so many fellow human beings.
“Why target the fun-loving people who went out to enjoy themselves?” a woman called Johanne told The Local.
“I’ve eaten at the Petit Cambodge before,” she said, referring to one of the restaurants where people were killed on Friday.
“We have a feeling it’s not yet finished. And that's what creates the fear.”