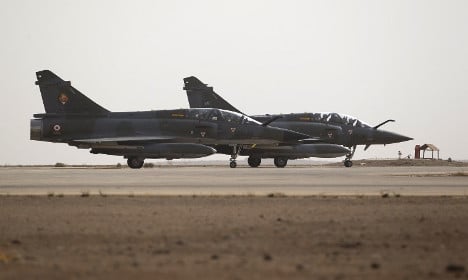 In its first air strike against IS since the string of deadly Paris attacks claimed by the jihadist group, 12 warplanes, including 10 fighter bombers, dropped 20 bombs on the targets.

“The first target destroyed was used by Daesh (another Arabic acronym for Isis) as a command post, jihadist recruitment centre and arms and munitions depot. The second held a terrorist training camp,” a ministry statement said.

The planes left from Jordan and the United Arab Emirates and was conducted in coordination with American forces, the ministry said.

French President François Hollande on Saturday blamed the Islamic State group for the gun and suicide attacks that left at least 129 dead in Paris on Friday, calling them an “act of war”.